It was on this date October 14, 1950, that Sun Myung Moon (문선명) was liberated by UN Forces from Hung Nam prison, Tong Nee Concentration Camp, in Korea, where he had been incarcerated for espionage. He was 30 years old. Four years later, Moon founded the Unification Church, whose followers are disparagingly but accurately called "Moonies" – as all of Moon's followers believe Moon is the second coming of Jesus, the Messiah.

Sun Myung Moon was born Moon Sun Myung (문선명), which means "Shining Dragon," in modern-day Sangsa-ri (上思里) in Pyongan Province, Korea, on 25 February 1920 (solar calendar: it was 6 January 1920 under the lunar calendar the Moonies use). At age 15, so the legend goes, Jesus directed Moon to complete the Galilean's failed mission of saving mankind. As a 15-year-old Presbyterian kid, however, Moon had to wait.

Moon married his first wife, Sun Kil Choi, in 1945, about the time the Japanese occupation of Korea ended. He became a disciple of Baek Moon Kim, who claimed to be God and wrote books from which Moon borrowed many of his basic doctrines, remaining a follower for eight months, even though Jesus had told him to save the world himself. In 1946 Moon abandoned his wife and 3-month old son, and started preaching in North Korea.

Moon's Presbyterianism was something of an act of rebellion against the (Shinto) Japanese colonialists, but in 1948 the Presbyterians excommunicated for being a bit too rebellious. According to the legend, Moon was only halfway through his sentence in Hung Nam prison, and about to be executed, when UN soldiers liberated him in 1950. Within four years he had changed his name to Sun Myung Moon, which means "Shining Truth," started writing his beliefs into a book, Divine Principle (in Korean, Wolli Kangron, 1956), and built his first Unification congregation.

The principle of the unification of mind and body, according to Moon – or his ghostwriter, Hyo Won Eu – is control of one's eating, sleeping and sexual desire. Denying these three things, of course, makes minds easier to control, so the Moonies have often been charged with being a mind-control cult. Moon teaches sexual purity, but in 1953 he managed to get a university student (Myung Hee Kim) pregnant. Since Moon hadn't bothered to divorce his abandoned wife, he sent the expectant mother to Japan to avoid arrest for adultery. (Moon acknowledged the child, who died at age 13.) 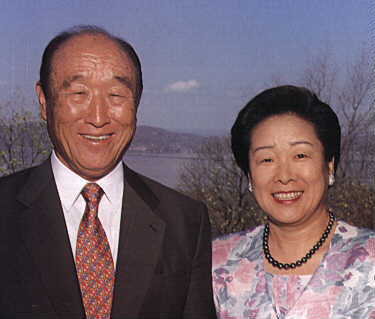 Moon married his current wife, Hak Ja Han (한학자), in 1955 – a God-blessed marriage making them the "True Parents" of the world. But that sanctification did not prevent the 44-year-old Moon from having another adulterous affair in 1967. He expanded his church through Korea, into Japan – and in 1971, with immigration help from the late Sen. Strom Thurmond (R-SC) and support from Sen. Orrin Hatch (R-UT), Moon officially came to convert America.

Already a millionaire at age 50, Moon would see the inside of a prison again for 18 months in 1984 on a tax evasion conviction. Once free, he increased his power with media outlets, including the Washington Times newspaper ("the instrument in spreading the truth about God to the world"), large business interests, and many deeply conservative cultural and political organizations. Moon even persuaded former Moral Majority leader Jerry Falwell to accept $3.5 million of church money to prop up the late Mr. Falwell's faltering Liberty University.

Like most fundamentalists, Moonies are opposed to homosexuality ("Homosexuals and fornicators are like dirty dung-eating dogs"[2]) and despise the separation of church and state ("The separation between religion and politics is what Satan likes most"[3]). Not surprisingly, these political positions align him most comfortably with the Religious Right in the US. Although he found the precept difficult to follow himself, Moon teaches that the best sex education is abstinence.

Like many millennialist Christians, Moonies hope for a Third World War, after which the world's faiths will be unified and religion and government become one. This is at odds with American tradition and government (not to mention humanity and good sense), but many otherwise sensible conservatives support him.[1] Indeed, Moon's ideal government is a theocracy he calls "Godism." "My dream," he said in a 1973 speech, "is to organize a Christian political party including all the Protestant denominations, Catholic, and all the religious sects. We can embrace the religious world in one arm and the political world in the other... The whole world is in my hand, and I will conquer and subjugate the world."[4] Of course, Moon himself would presumably be the leader of such a government.

Unlike the People's Temple under Jim Jones, the Moonies are not a death cult: they are better connected, better financed, and more astutely run than any recent sect except, perhaps, the Mormon Church. As with all revelations, that of Sun Myung Moon was a one-time thing; everything since then has been hearsay. You either trust what is promised to you by someone who wants your money, your labor, and your allegiance – or you don't.

Atatürk had great contempt for all religion, and tried to extinguish it. He claimed that his only standard was the good of Turkey.