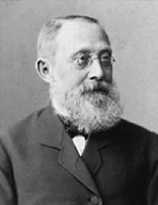 It was on this date, October 13, 1821, that German pathologist, anthropologist and politician, Rudolf Ludwig Karl Virchow, was born in Schivelbein, Pomerania, Prussia. Rudolf Virchow was one of the keenest minds in 19th century medicine in Europe, the founder of the science of cellular pathology – the theory that disease arises in cells rather than in the organs. He was professor of pathology at Berlin University, was removed for supporting the revolution of 1848 – but due to his scientific reputation Virchow was asked to return in 1856. "The task of science," he said, "is to stake out the limits of the knowable, and to center consciousness within them."

It was in that very speech, "The Task of Science," that Virchow declared his agnosticism, rejecting all religion. As a politician, he led the Freethinking Liberals for some years in the Reichstag. In his later years Virchow became a Conservative. He also served the community, bringing his scientific skill to bear on public health problems such as meat inspection and sewage disposal. "Medical education does not exist to provide students with a way of making a living," he said, "but to ensure the health of the community."

It is true that Virchow opposed Darwin's theory of evolution, and feuded with Ernst Haeckel over it – but only because he believed that Darwinism led to Socialism. Ironically, anti-evolution Christians list him as an ally, even though Virchow attacked the churches all his life. Up until his death, on 5 September 1902 in Berlin, Virchow worked for the physical betterment of communities and lives.