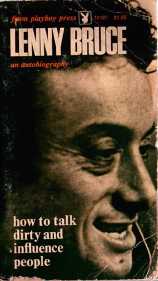 It was on this date, October 13, 1925, that American comedian Lenny Bruce was born Leonard Alfred Schneider on Long Island, New York. As the name might suggest, Bruce grew up a tough Jewish kid who expressed his ethnicity with humor. "You and I know what a Jew is," he said. "One who killed our Lord. Yes. I will clear the air: we did it. I did it; my family. I found a note in the basement."

Lenny Bruce came to prominence in the 1950s and 1960s with his edgy, penetrating satire on taboo subjects such as racial fears, sexual fantasies, and, of course, religion. "If Jesus had been killed twenty years ago," said Bruce, "Catholic school children would be wearing little electric chairs around their necks instead of crosses." In a 1961 routine called "Christ and Moses," an agitated Bishop Sheehan tells Cardinal Spellman about the unexpected appearance of Christ and Moses in New York. What to do about them?

In his best religious satire, "Religions, Inc.," Bruce portrayed the religious leaders of his day as conspiring with "Johnny," Pope John XXIII, to rake in profits rather than work for social justice. Oral Roberts complains, "'Thou shalt not kill' means just that; it doesn't mean 'Amend., section A', it means, 'Stop war!'" And, referring to racial integration, a hot topic in 1958, Roberts says people "don't want no more quotations from the Bible – they want us to come out and say things. They want us to say let them go to school with them"

"People should be taught what is, not what should be," said Bruce. "All my humor is based on destruction and despair. If the whole world were tranquil, I'd be standing in the breadline, right back of J. Edgar Hoover." Instead of the bread line, Bruce was jailed in 1961 on obscenity charges and in 1963 his show was banned in Britain and Australia. Because Bruce used profanity, club owners in the US feared to hire him and begged him to clean up his act.

Forty-year-old Lenny Bruce died of a heroin overdose on 3 August 1966, in his home on Hollywood Boulevard. Although he offended the straight-laced, Bruce won a cult following among the young and hip: Today he is considered a martyr to free speech. Bruce's autobiography, suggested by supporter and Playboy publisher Hugh Hefner, and called How to Talk Dirty and Influence People (1965), inspired a play and a 1974 film. It was an Agnostic Lenny Bruce who said, "Every day, people are straying away from the church and going back to God."

The Week in Freethought History (October 7-13)

Here’s your Week in Freethought History: This is more than just a calendar of events or mini-biographies – it’s a reminder that, no matter how isolated and alone we may feel at times, we as freethinkers are neither unique nor alone in the world. Last Sunday, October 7, but in 1865, U.S. businessman Ezra Cornell, […]