It was on this date, October 13, 1307 – and presumably on a Friday – that King Philip IV ("the Fair") of France arrested all of the Templar Knights. The religious order had been the subject of rumors of blasphemy and irreligious practices, but in fact the Knights of the Temple of Solomon or (from their logo) the Red Cross Knights, were "just brutal, pious, simple-minded men," who became wealthy and corrupt as soon as the Church showered blessings and money on the order.

The Templars were formed after the First Crusade as a body of knights charged with prosecuting the crusades, and with living morally upright lives in the service of their church. So unpopular was that second qualification in the Middle Ages that the core of the Templars was only nine knights. The number slowly increased until, in 1128, they were incorporated as a monastic order with the usual three vows. By 1200, they were so rich and loose in morals that a contemporary jibe for heavy drinking was "He drinks like a Templar." Their wealth increased through the same ruse the Jews used to circumvent the Church law against lending money at interest – the original meaning of usury. The party only came to an end when the Templars became so corrupt and so powerful that Philip, at the urging of Pope Clement V, had to extinguish them.

The symbol of the Knights Templar: a red cross (with medallion)

The leaders were tortured into confessing impiety and sodomy in their houses and, although the method is not conducive to extracting truth, it is clear that the practices were rampant. The methods were standard: "The feet of the accused were oiled and fired, splinters were driven under their toe- and finger-nails, weights were tied to their genital organs, and so on," says McCabe. "Some underwent torture six or seven times. A large number, including the Grand Master [Jacques DeMolay] and three other leading Masters, confessed and were burned alive."*

The popular legend that the end of the Templars took place on a Friday the 13th, and that that is the origin of the bad luck associated with the day, is just as fabulous as that it arose from the 13 Christian apostles (including the traitor Judas) at the Last Supper. The legend of Loki crashing a banquet of 12 Norse revelers in Valhalla was another, later, turn on the fable. But although there are some references to Friday being unlucky in Geoffrey Chaucer's time (14th century: "And on a Friday fell all this mischance"), there appears to be no reliable reference to the unluckiness of Friday the 13th before the 1800s. 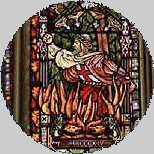 In the Gregorian calendar, the 13th is slightly more likely to fall on a Friday than on any other day of the week, and any month beginning on a Sunday will have a Friday the 13th, but rational thinkers ignore the superstition. Still, Paraskevidekatriaphobia, or fear of Friday the 13th, seems common enough to be the reason many people will skip work, refuse to travel, and not start anything new on that day – and why some buildings have no 13th floor and Room 13 often disappears. Is there something to the superstition? We might remember the troubles in 1970 during the flight of Apollo 13.

But Friday the 13th is considered unlucky only in Western, Christian-dominated cultures: there is no such superstition in Asia or the Islamic world. The superstition can be a self-fulfilling prophecy, people will engage in what logicians call "confirmation bias" when bad things happen on a day you already believe is bad. When Philip the Fair decided to arrest and torture and burn the Templars on this day in 1307, he had back of him no tradition of bad luck or good luck associated with the 13th day of the month – but it was unfortunate for about one hundred Christians!

Templar knights (from a contemporary woodcut)