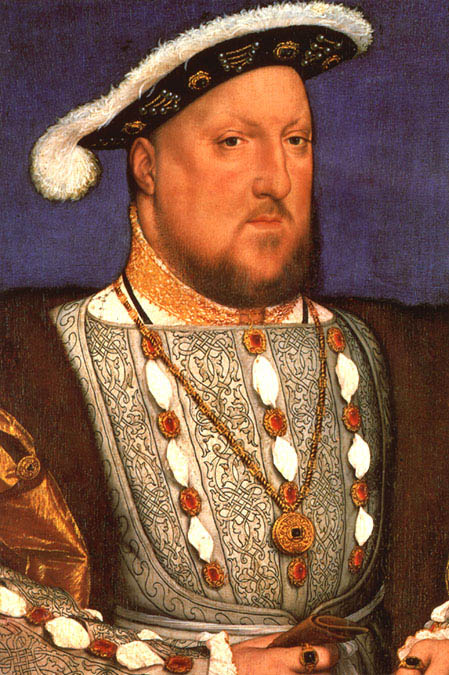 It was on this date, October 11, 1521,* that Pope Leo X conferred the title Fidei Defensor, which is Latin for "Defender of the Faith," on England's King Henry VIII. That Medici pope, whose profligate spending and perverse pleasures were the outrage of Rome, was a staunch opponent of any kind of reform or dissent from doctrine, so he condemned Martin Luther in 1520. Leo was pleased to find an ally in the English monarch, who, with the help of Sir Thomas More, wrote Assertio Septem Sacramentorum Martinum Lutherum (Declaration of the Seven Sacraments Against Martin Luther). Leo rewarded Henry's defense of the true faith. To this day, "Defender of the Faith" forms part of the English monarch's titles. 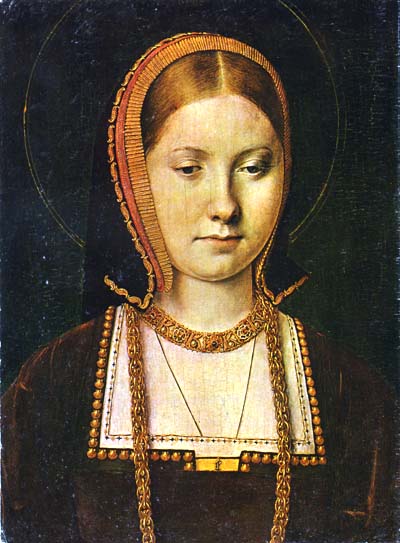 But Leo was dead within two months, so he never saw what trouble Henry later caused the church he had defended so nimbly. And Henry was not only an early Renaissance monarch – in 1521, William Shakespeare's parents were yet to be born! – but was well educated in the arts and sciences of his time. Desiderius Erasmus (1466-1536) notes that Henry was an accomplished pupil. Catholics have worked hard to create an image of Henry as a lustful, sensual and vulgar king, and the popular media, never notable for critical thinking, have done their best to play along. It is true that after his accession he occupied himself with naval affairs and sporting events, but he composed creditable music, and there is every reason to believe Henry wrote most of his Declaration of the Seven Sacraments himself.

We hear most often about Henry's trouble with Sir Thomas More, over More's resolute refusal to approve the King's divorce from the infertile Catherine of Aragon. This conflict was memorably dramatized in the 1961 Robert Bolt play (A Man for All Seasons) and subsequent film (1966). The fact behind the fiction is that Henry desired, and England expected, a male heir to the throne, and his marriage to Catherine was not producing one. Pope Clement VII (two popes later than Leo) had granted divorces (tenderly termed "annulments"), on far more frivolous grounds, to others. But, in Henry's case, Clement's intransigence had less to do with Henry's "lust" – a transparent cover story, anyway – and more to do with Charles V protecting his cousin Catherine's title to the English throne. Clement would have granted Henry's request had the French protected him, but Charles was controlling Rome at the time, and the pope would not have dared to alienate him.

As for Henry's personal beliefs, it is fair to say that he was at least publicly pious, as was his daughter (by Anne Boleyn) Elizabeth. But like his daughter, and many of the popes of the time – such as Alexander VI, Julius II, Leo X, and Clement VII – he never let his piety trump his politics. When he seized Church property, Henry knew the English monasteries, and to some extent the Catholic clergy, for what they were: morally lax and corrupt.

Although not as deeply doubting at Elizabeth and many of her court, Henry had a healthy skepticism toward Catholic doctrine. The Encyclopædia Britannica says that he "would readily have sacrificed any theological convictions he may have had in the interests of national uniformity." Furthermore, his mind was "intensely secular," and he was "as devoid of moral sense as he was of genuine religious sentiments." For those who would conclude that Henry's skepticism lead to his moral degradation, you might reflect that he was no better and no worse than his contemporaries – and unlike the corrupt popes with whom he dealt, Henry did not presume to represent God on earth!

Washington was never seen to accept communion, and indeed, his wife wrote that he left the church on the occasions when communion was offered.