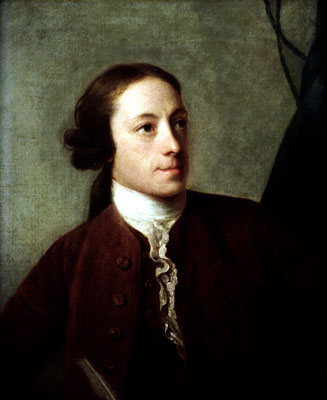 It was on this date, September 24, 1717, that English man of letters Horace Walpole was born in London. The youngest son of England's longest-ruling Prime Minister, Robert Walpole (who was most likely an Atheist), Horace's original first name was Horatio. Educated according to his social station, at Eton and King's College, Cambridge, Walpole graduated to traveling on the Continent for two years with poet Thomas Gray. Most likely, Walpole and Gray were homosexual lovers and Walpole's premature return to London in 1741, to take a seat in Parliament, was because they had quarreled.

Four years later, his famous father died, leaving him great wealth, but Walpole retained his seat in Parliament – and followed his father's loyalties to King George II and Queen Caroline (Walpole observed Caroline to be a Deist believing in a future life).

Two years later, in 1747, Walpole bought a house near Twickenham outside London, which he turned into a whimsical neo-Gothic mansion called Strawberry Hill. It was this architectural self-indulgence that started a neo-Gothic revival in England. Housed at Strawberry Hill was an eclectic collection of art, plus a small private press, on which he printed some of his now-reinstated friend Thomas Gray's works. Walpole published his own Gothic novel in 1765, The Castle of Otranto, to reflect that architectural style, and thereby launched a trend in Gothic literature.

Principally known as a letter-writer – his extant letters fill sixteen volumes – Walpole was one of the most brilliant writers of the Deistic school. In his letters he freely admitted his skepticism about immortality and his distaste for priests. He described a 1739 funeral procession in Paris as:

...a most vile thing. A long procession of flambeaux and friars; ... nothing but friars, white, black, and grey, with all their trumpery. ... By the bye, some of these choice monks, who watched the body while it lay in state, fell asleep one night, and let the tapers catch fire of the rich velvet mantle lined with ermine and powdered with gold flower-de-luces, which melted the lead coffin, and burnt off the feet of the deceased before it awakened them.[1]

Now and then we drop in at a procession, or a high-mass, hear the music, enjoy a strange attire, and hate the foul monkhood. Last week, was the feast of the Immaculate Conception. ... The vice-legate, whose conception was not quite so immaculate, is a young personable person, of about twenty, and had on a mighty pretty cardinal-kind of habit; 'twould make a delightful masquerade dress.[2]

Back in England, Walpole showed the same disdain for religion:

Besides, the woman who showed me the church [in Malvern Abbey] would pester me with Christ and King David, when I was hunting for John of Gaunt and King Edward.[3]

And in observing churches in his travels, Walpole wrote,

A Gothic church or a convent fills one with romantic dreams – but for the mysterious, the church in the abstract, it is a jargon that means nothing, or a great deal too much, and I reject it and its apostles.[4]

Horace Walpole died on 2 May 1797 at age 79. Among his contributions to English literature was this donation to the English language: in the Persian fairy tale The Three Princes of Serendip (1754), Walpole noted the heroes finding valuable things they weren't looking for, thus coining the word serendipity.[5]

Michael Servetus (1511) It was on this date, September 29, 1511,* that the Spanish cleric Miguel Serveto, known by his Latinized name, Michael Servetus, was born in Villanueva. Recognizing an incipient intellect, at the age of 13, his father, a Roman Catholic cleric, sent his son to study at the University of Zaragoza/Lerida. It developed […]