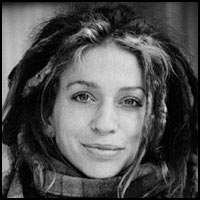 It was on this date, September 23, 1970, that recording artist and entrepreneur Ani DiFranco was born in Buffalo, New York. She got her first lessons in performance from Buffalo bar talent, which left her with no illusions about the music business. DiFranco began singing and playing acoustic guitar before she was 10, and by age 15 she was writing her own songs and booking herself anywhere she could play.

DiFranco gave the traditional record company, pop-star route an end-run by forming her own record label, Righteous Babes Records, in 1990 – "Well, I'm a socialist and an anarchist," she explained in a 1995 interview[1] (forgetting the part about being an entrepreneur until she got annoyed at Ms. Magazine for pointing it out). DiFranco borrowed money, recorded and played her own songs, and released her self-titled debut album that same year (1990). She sold her first album, so the story goes, "from the trunk of her hand-painted car while blazing a path across the college campuses and seedy dives of America."[2]

DiFranco's folk-rock blend of music is enhanced by lyrics that have been described as plainspoken yet poetic: they are not shy in expressing her feminism, her bisexuality, her working-class ethic, and her topical and political concerns. On a 1999 album titled To the Teeth, DiFranco responded to the Columbine shootings in her title song this way:

In a subsequent interview, DiFranco clarified:

DiFranco is just as straightforward about her disrespect for religion. Rock critic Jim Walsh once asked her, "What song proves to you that there is a God?" DiFranco's staccato reply: "I'm an atheist, for Chrissake!"[4] In another interview from 2000, DiFranco was asked to explain the line "God's work isn't done by God, it's done by people" from her 1998 song, "Up, Up, Up." She replied,

Well, I'm not a religious person myself. I'm an atheist. I think religion serves a lot of different purposes in people's lives, and I can recognize the value of that, you know, the value of ceremony, the value of community, or even just having a forum to get together and talk about ideas, about morals – that's a cool concept. But then, of course, institutional religions are so problematic.
And that line from the song, anyway, is how unfortunate it is to assign responsibility to the higher up for justice amongst people. My spirituality tends to be more in the vein of, if there is a God it exists within us, and the responsibility for justice is on our shoulders. What if we just looked to each other in this way? What if the steeples didn't all point up? What if they all pointed at us, and we had to care for each other in the way that we expect God to care for us? I'm much more interested in that.[5]