September 22: The Angel and the Mormon 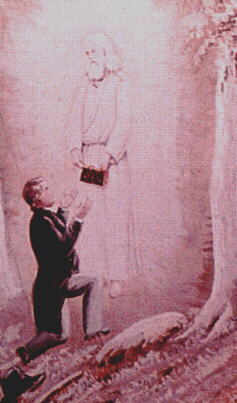 Smith and his Angel Moroni

It was on this date, September 22, 1827, that the resurrected being described as the angel Moroni appeared to Joseph Smith and eventually revealed the location of golden tablets containing the Book of Mormon beneath a hill in Palmyra, New York. Moroni is supposed to have been a prophet who lived in North America in the late 4th century. The golden plates were compiled and abridged by Moroni's father, Mormon, a Nephite warrior but also a prophet. The Book of Mormon was purported to be the story of ancient Americans known as Nephites and Lamanites, records buried in a hill called Cumorah centuries ago.

As Smith himself described his meeting with Moroni:

33 He called me by name, and said unto me that he was a messenger sent from the presence of God to me, and that his name was Moroni; that God had a work for me to do...
34 He said there was a book deposited, written upon gold plates, giving an account of the former inhabitants of this continent, and the source from whence they sprang...
35 Also, that there were two stones in silver bows – and these stones, fastened to a breastplate, constituted what is called the Urim and Thummim – deposited with the plates; and the possession and use of these stones were what constituted "seers" in ancient or former times; and that God had prepared them for the purpose of translating the book.

Smith was a diviner of buried treasure in his youth, so he was comfortable with using magical devices to see things no one else could see. He kept such a close watch on the golden plates that he was using as a source for his translation that he would allow no one to see them. With his magic stones, Smith could translate the plates even without looking at them.

But after Smith finished 116 pages of the Book of Mormon, one of Smith's financial backers, Martin Harris, borrowed and then lost them! Smith needed some divine assistance and he got some: the missing pages, describing early Israelite-Americans, would not be retranslated, but instead translated anew from a different set of plates, magically provided. 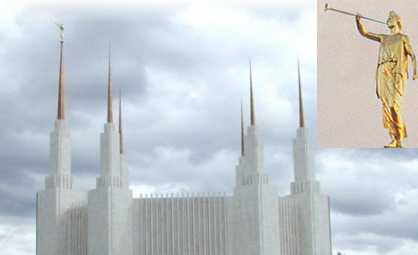 The Mormon Temple in Washington, DC, near where I live (dedicated in 1974), displays atop its tallest spire a golden statue of Moroni blowing his trumpet. The architecture itself looks so much like the castle in Emerald City (of the 1939 Victor Fleming film The Wizard of Oz), that some wag painted on a railroad overpass crossing the Capital Beltway, visible as the "castle" comes into view, the words "SURRENDER DOROTHY"!

Visitations from angels are a common theme in religious mythology. Angels – literally, a "messenger" (αγγελος in Greek, מלאך in Hebrew, مـلـك in Arabic) – are supposed to be heralds from the heavens, protectors of humans, fighters of fallen angels like Satan, and carolers in God's adulatory chorus. Angels are mentioned 344 times in the Christian Bible; 146 times in the Book of Mormon, and 96 times in the Koran (the angel Gabriel is said to have revealed Allah's words to Muhammad).

One common attribute of angels is that they are creatures without bodies – yet they think, feel and act. It is a mystery how thinking can occur without a brain, action without a body. Imagining a body without substance is like imagining a four-sided triangle!

Since Joseph Smith was the only witness to the appearance of Moroni, and only eight others claim to have seen the golden plates – they were converts rather than disinterested witnesses – there is little to corroborate Smith's story. If we add that the Book of Mormon shows every indication of being written by a lightly educated man of 1800s North America, who plagiarized most of it from the KJV Bible, committed gross errors of anachronism, and showed amazingly little knowledge of both Judaism and fourth-century Judea – we might conclude that the Church of Jesus Christ of Latter-Day Saints is based is a colossal fraud.

But with $30 billion in assets, an annual gross income of $6 billion, and membership of about 10 million and growing, the Mormon Church is a colossally successful fraud! However, to paraphrase Anatole France, "If fifty million people believe a foolish thing, it is still a foolish thing."

In her “Memoirs” Von Suttner remarked that if she had been asked in her youth to describe her religion, she would have said, "None – I am too religious."