It was on this date, September 19, 1692, during the Salem Witch Trials in Massachusetts colony, that sentence was carried out on Giles Corey (or Choree or Cory) that he be pressed to death for witchcraft. Corey was a prosperous farmer and 80 years old – he was on his third wife – but a church-going member of the community. In April of that year he was accused of witchcraft. This may have been because he had allied with the wrong local family and crustily criticized the witchcraft proceedings.

Jailed from April until September, Corey knew he was finished as soon as he was accused, so his only concern was the preservation of his property. Corey refused trial, for which the penalty was to be pressed to death: without a trial and conviction, his farm could not be forfeit to the colony and would instead be passed to his heirs.

Pressing was one of a vast array of colorful tortures – as punishment or to extort confessions – invented or improved for the purpose of demonstrating Christian love. Torture and mutilation is still practiced in the Islamic world, but in higher civilizations, after the Enlightenment, torture was abandoned wherever religion was divorced from government.

The Babylonian Hammurabi Code, and the Hebrew Code that was based on it, approved torture under the lex talionis (an eye for an eye), but in Roman law torture was condemned by the Stoic-Epicurean moralists and jurists such as Seneca and Ulpian. Pope Leo I encouraged burning heretics alive in the fifth century, but the use of torture began unofficially in the ironic quarrel with the fourth-century Arians about the divinity of Christ. "Women, especially 'sacred virgins' on either side," says one historian, "had their breasts crushed or scorched, were beaten with thorn-clubs, and were compelled to sit on hot iron plates."*

In the Feudal Age (1200s-1300s) owners of serfs – four-fifths of the population – inflicted screaming torture, without a whisper from the churches. Torture continued through the so-called Age of Chivalry (1100-1400). As late as 1500 in Rome, says another historian,** castration was still practiced, and the offender was forced to carry his severed testicles through the streets on a pole! If that wasn't enough, how about cutting or burning out the eyes, chopping off hands, feet, ears, breasts (of women) and cutting out or piercing the tongue with a hot iron?† It took extraordinary measures to show God's love!

The French Revolution that Christians love to hate abolished official torture – the practice was reinstated with the recovery of the Catholic Church in France. Tortue has always been effective in extracting confession; less so for extracting the truth. However, once the churches lost temporal authority, they lost the power to torture opponents and could only argue with them. Civilization thereby advanced. 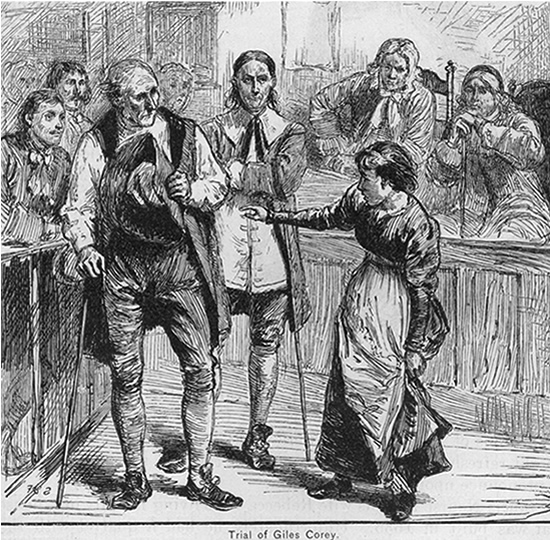 The advance was too late for Giles Corey: on 19 September 1692, Corey was stripped naked, a board placed on his chest, and then heavy stones piled on top. The pressing lasted for two days, until Corey finally died of suffocation. The magistrate stopped the torture occasionally in order to hear anything Corey might wish to confess. "More weight," was all Giles Corey would say.

The Salem Witch Trials occupied less than one year of American history. Giles Corey is the only person in North American history known to have been legally pressed to death, although there is some question as to whether the punishment was legal at the time. Martha Corey was convicted, too, and hanged the day after her husband died – two less witches for the churches to worry about!

Boiling oil ... and molten lead were poured over offenders, they were broken on the wheel or nearly tom asunder on the rack, the bones of the lower leg were broken with the "Spanish Boots," and the thumbs with thumbscrews, weights were hung from the genitals, water dripped from a height on to the stomach, the feet were washed with salt water and goats brought to lick the soles, intense hunger and thirst were inflicted, men were hung up for hours by the wrists or (sometimes in the case of nuns), smeared naked with honey and spread in the sun to attract insects, hot boiled eggs were fixed under the armpits of men or to the breasts of women, legs were wrapped tight in calf-skin and boiling oil poured over, hands or feet were burned off, string was tied tight round the head, nails were tom out and teeth broken, the flesh was tom with red-hot pincers. ... Bernard de Cahuzac, a high French noble, cut off the hands and feet and cut out the eyes of 150 monks and nuns in one community and left them to die because, he said, they had hidden their treasure. His "noble" wife assisted him, and with her own hands split the breasts and tore out the nails of the women.