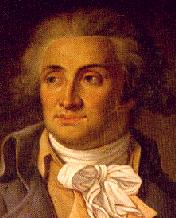 It was on this date, September 17, 1743, that French mathematician and political philosopher Marie Jean Antoine Nicolas Caritat, Marquis de Condorcet, was born in Ribemont, Picardy, France. His father died early, so his mother, a very devout woman, had Condorcet educated at Jesuit Colleges in Reims and at the Collège de Navarre in Paris. He achieved his first notice as a mathematician, publishing a work on calculus as well. He was elected to the French Academy in 1769 and appointed its Perpetual Secretary in 1777.

Condorcet became, in the words of the Encyclopedia Britannica, "a zealous propagator of the religious and political views then current among the literati of France," after meeting and befriending Voltaire, the Encyclopedist Denis Diderot and Jacques Turgot. Indeed, Condorcet wrote a caustic and brilliant criticism of religion in his Life of Voltaire (1789). Turgot had Condorcet appointed Inspector General of the Mint in 1774 under Louis XVI. When his mentor was sacked, Condorcet tried to resign in protest, but the King refused. Condorcet remained at his post until 1791, while publishing a defense of his friend (1786).

When the Revolution engulfed France, Condorcet fully espoused the republican cause and became Secretary of the Legislative Assembly. He likewise supported the ideals being instituted in the newly formed United States of America. In his design for the state education system, on which modern French education is based, Condorcet wrote,

Regardless of the subject, the public authority can have no right to authorize the teaching of opinions as truths; it must impose no beliefs. ... Above all, it should be done by assuring good minds the means of avoiding these errors and recognizing all their dangers. ... The duty of the public authority is to arm the full force of truth against error, which is always a public evil. But it does not have the right to decide where truth resides or where error is to be found. In the same way, the function of ministers of religion is to encourage men to fulfill their duties; but the claim to decide exclusively what these duties are, would be the most dangerous of clerical usurpations.*

Condorcet defended human rights in general, and women's rights in particular. But he remained an implacable foe of clerical interference in politics, arguing that the evils of life stemmed from a conspiracy of priests and rulers against the people, and that bad laws and institutions inevitably followed.

Unfortunately, while he supported the Revolution, he supported it from within the moderate Girondin party, and when the radical Jacobins took power under the pious Robespierre, Condorcet – who voted in favor of sparing King Louis's life and against the Jacobin constitution – was forced to flee for his own life. While in hiding, Condorcet wrote a philosophical work, Sketch for a Historical Picture of the Progress of the Human Mind (published posthumously, 1795).

Believing his hiding place had been discovered, Condorcet emerged, but was arrested, and died in prison in Bourg-la-Reine (near Paris) on 29 March 1794 – but whether by murder or by his own hand is still in dispute. What is not in dispute is his character. As H.B. Acton eulogized him in the Britannica,

Wholly a man of the Enlightenment, an advocate of economic freedom, religious toleration, legal and educational reform, and the abolition of slavery, Condorcet sought to extend the empire of reason to social affairs. Rather than elucidate human behaviour, as had been done thus far, by recourse to either the moral or physical sciences, he sought to explain it by a merger of the two sciences that eventually became transmuted into the discipline of sociology.