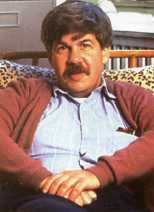 It was on this date, September 10, 1941, that "One of the most influential evolutionary biologists of the 20th century and perhaps the best known since Charles Darwin"[1] - Stephen Jay Gould - was born. He grew up in New York City, graduated from Antioch College and in 1967 earned his doctorate from Columbia University. From 1967 Gould was Professor of Geology and Zoology at Harvard University and curator for Invertebrate Paleontology at the institution's Museum of Comparative Zoology. But it was through his monthly columns in Natural History magazine, and his many books, that Gould became the leading spokesman for evolutionary theory in the last decades of the 20th century.

Those books include Ever Since Darwin: Reflections in Natural History (1980), The Panda's Thumb (1983), Hen's Teeth and Horse's Toes (1984); Wonderful Life (1991), and Bully for Brontosaurus (1992), and he has won the National Book and National Book Critics Circle awards. Gould's Mismeasure of Man (1981), when updated and expanded in 1996, contained a refutation of the arguments in The Bell Curve[2] (1994), which uses psychometrics to give a patina of science to racism. He was also adamant in his defense of evolution in court: Gould was a witness in the 1982 McLean v. Arkansas trial, popularly know as Scopes II, that defeated the teaching of creationism in Arkansas public schools.[3]

"Creation science" has not entered the curriculum for a reason so simple and so basic that we often forget to mention it: because it is false, and because good teachers understand exactly why it is false. What could be more destructive of that most fragile yet most precious commodity in our entire intellectual heritage - good teaching - than a bill forcing honorable teachers to sully their sacred trust by granting equal treatment to a doctrine not only known to be false, but calculated to undermine any general understanding of science as an enterprise?[4]

Orchids manufacture their intricate devices from the common components of ordinary flowers, parts usually fitted for very different functions. If God had designed a beautiful machine to reflect his wisdom and power, surely he would not have used a collection of parts generally fashioned for other purposes. Orchids were not made by an ideal engineer; they are jury-rigged from a limited set of available components. Thus, they must have evolved from ordinary flowers.[5]

Because Gould's support of evolution strikes at the heart of the faith of the creationist, he is often asked about God. Biography magazine interviewer Curt Schleier asked Gould directly, "Do you believe in God?" Gould replied, "There are a thousand definitions of God. I don't think there's a fellow sitting in the clouds with a long beard. There are some definitions of God that are so benevolent that I might be willing to entertain the notion."

In a 1996 interview with Michael Shermer in Skeptic magazine, Gould described himself as a secular Jew. "Are you an agnostic?" asked Shermer. Gould replied, "If you absolutely forced me to bet on the existence of a conventional anthropomorphic deity, of course I'd bet no. But, basically, Huxley was right when he said that agnosticism is the only honorable position because we really cannot know. ... I'd be real surprised if there turned out to be a conventional God."[7]

Gould’s other controversial idea, in which he glosses over the inescapable conflict between religion and science, he called “Non-Overlapping Magisteria.” Essentially pushing the combatants to two separate philosophical corners of the boxing ring, this “NOMA” idea, outlined in his 1999 book Rocks of Ages, has been warmly criticized by nonbelievers and believers alike. Believers, typically if counterfactually, will not admit of any philosophical real estate their God cannot occupy; nonbelievers, in particular, Richard Dawkins in The God Delusion - published four years after Gould died – counterclaim that religious faith is always presumptuously treading into the evidence-based world.

Gould died of cancer in New York City on 20 May 2002 at age 60. It was Stephen Jay Gould who said, "I remember a story about Clarence Darrow, who was quite atheistic. Somebody asked him: 'Suppose you die and your soul goes up there and it turns out the conventional story is true after all?' Darrow's answer was beautiful, and I love the way he pictured it with the 12 apostles in the jury box... He said that for once in his life he wasn't going to make a long speech. He was just going to walk up to them, bow low to the judge's bench, and say, 'Gentlemen, I was wrong.'"[8]

For sure, it was "just a theory," as creationists like to dismiss the theory of evolution, even though this Copernican theory was as unassailable as science as heliocentricity was dangerous to theology.