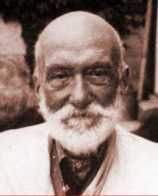 It was on this date, September 1, 1848, that Swiss physiologist Auguste-Henri Forel was born in La Gracieuse, near Morges, Switzerland. He was fascinated as a boy with insects of all kinds, but was persuaded to study medicine at the University of Zürich, 1866-1871. In spite of that, he published papers on insects and became a member of the Swiss Entomological Society. This culminated in his greatest publication, The Mental Capacity of Ants, in 1907, which was awarded the Academy Prize.

Forel’s work in human psychology and the anatomy of the brain influenced Sigmund Freud. He was appointed professor of psychiatry in 1879 at the University of Zürich Medical School and not only ran the Burghölzli asylum there, but continued to publish papers on insanity, prison reform, and social morality. His outspoken socialist views and rationalism perplexed his associates, but his 1908 publication, Vie et mort or Life and Death, describes his rationalist views. Forel describes his Agnosticism in the 1914 symposium What We Owe Ernst Haeckel.[1]

Forel suffered a stroke that paralyzed his right side in 1912, but taught himself to write with his left hand and was able to continue his studies. In 1920 he became a Bahá'í, out of respect for it social work and because, despite its acceptance of a god, it lacked "dogmas or priests."[2] At age 82, on 27 July 1931, Forel died in Yvorne. It was Auguste-Henri Forel who, referring to ants, but extending the materialistic idea to humans, wrote, "Every act of thinking is identical with the molecular activity of the brain-cortex that coincides with it."[3]

[1] Auguste-Henri Forel, Was Wir Ernst Haeckel Verdanken (What We Owe Ernst Haeckel). Leipzig: Verlag Unesma GmbH, 1914, vol. I, p. 242.
[2] About his conversion, Forel said, "[I]n 1920, I first came to know of the supraconfessional world religion of the Bahá'ís, founded in the East more than seventy-five years ago by the Persian Bahá'u'lláh. This is the true religion of human social good, without dogmas or priests, uniting all men on this small terrestrial globe of ours. I have become a Bahá'í. May this religion live and prosper for the good of mankind; this is my most ardent wish." (Quoted Wikipedia and also from a Swiss Bahá'í Web site)
[3] Auguste-Henri Forel, Die psychischen Fähigkeiten der Ameisen und einiger anderer Insekten, mit einem Anhang über die Eigentümlichkeiten des Geruchsinnes jener Tiere. Vorträge gehalten den 13.8.1901 (The mental capacity of ants). München: Ernst Reinhardt, 1907.

Although he was agnostic, the Catholic-born Moore he preferred to be regarded as a Protestant – even though Protestants, too, found his ideas about Jesus troublesome.