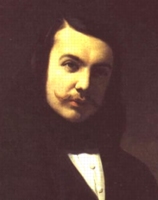 On this date, August 31, 1811, French poet and journalist Pierre Jules Théophile Gautier was born in Tarbes, in the southwestern region of France. Although he was inclined to paint, he was influenced by Victor Hugo to write poetry and got a job at the Chronique de Paris with help from Honoré de Balzac. Gautier worked as a journalist, but his first love was poetry: "Imagination is the one weapon in the war against reality," he famously said.

Few poets better exemplify the expression "art for art's sake" (ars gratia artis) better than Théophile Gautier. Biographer Joanna Richardson refers to Gautier's "profession of the religion of beauty," saying, "Poetry was to him the language of the gods..."[1] In his most famous, and most agnostic, novel, Mademoiselle de Maupin (1835), Gautier wrote, "Beauty, for me, is visible divinity, it is palpable happiness, heaven descended on earth. ... Who could not kneel before thee, pure personification of the thought of God?" Elsewhere in the same work, Gautier mused, "If Don Juan had once found his ideal, he would have been the most faithful of lovers; but his greatness was in not meeting it, for he sought absolute beauty, and absolute beauty is God."

As a drama critic, Gautier was a perfectionist, and his perfectionism was based in his rationalism. He especially regretted the heavy editing of Molière's works and praised the playwright as "the greatest man that nature has produced."[2] As Richardson notes on the occasion of Gautier's reviewing a vaudeville "... travesty of mythology, he saw fit to remind his readers that all forms of religion, whether practised or disused, should be respected." And further, "Gautier's poetic (and Romantic) feeling ... is found in his veneration for all religions and for the supernatural, even for superstition..."[3]

"He would like to believe in a consolation after death," writes Richardson, "but he cannot; and he will never be able to accept the Catholic belief in the life to come. Gautier will always venerate all religions; he will constantly practise many of the Catholic virtues. And whatever his cynicism, it will always hide a Romantic thirst for the impossible ... the longing to believe, the longing for Christian faith that is not satisfied."[4] This attitude is echoed in Gautier's Comédie de la Mort (1838).

Gautier died on 23 October 1872, but the clergy left before they could sprinkle their holy water. He was buried instead with torn branches covering his coffin. It was Théophile Gautier who said, "In art we have no religion but the religion of art itself."[5]