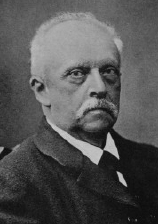 It was on this date, August 31, 1821, that German physician and physicist Hermann Ludwig Ferdinand von Helmholtz was born in Potsdam, Prussia, in what is now Germany. The son of a classics teacher of small means, Hermann was persuaded to set aside his love of natural science in favor of medicine, because the Prussian government would pay for a medical education – as long as he committed to 10 years as a physician in the army. But his intellect was insatiable, so he read works of philosophy at the University of Berlin, particularly the works of Immanuel Kant, and taught himself mathematics.

In an 1847 physics treatise Helmholtz described the law of the conservation of energy. This was in line with his philosophical belief that no deity or "vital principal" was necessary to explain muscle movement. Indeed, as a thorough and outspoken Agnostic, Helmholtz believed medicine would eliminate belief in "mystical disease-entities" just as Newton and physics would eliminate belief in "astrological superstitions"; likewise, he opposed spiritualism and mysticism.[1]

In 1851 Helmholtz invented the ophthalmoscope, an instrument which can be used to look into the human eye. Not surprisingly, he was more interested in the function and physiology of the senses than in fantastical worlds beyond the senses. This inspired his student, Wilhelm Wundt, one of the founders of experimental psychology, to study the psychology of the senses.

In 1871 Helmholtz moved from Bonn to Berlin to teach physics. There he studied electromagnetism. In 1888 he became President of the Physico-Technical Institute at Charlottenburg. Still outspoken in his skepticism, Helmholtz maintained that God was not necessary to the functioning of the universe; that no "act of supernatural intelligence" explains the origin of humanity better than Darwin's theories."[2] Hermann von Helmholtz died a skeptic in Charlottenburg on 8 September 1894.