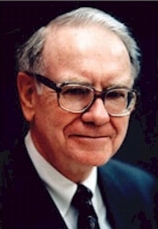 It was on this date, August 30, 1930, that Warren Buffett, known as "the Oracle of Omaha," was born in Omaha, Nebraska. As Chairman of Berkshire Hathaway, Buffett became perhaps the greatest investor of all time – reportedly worth almost $43 billion – second in wealth only to Microsoft Chairman Bill Gates. He began well prepared for the investing trade: his father was a stock broker and a member of Congress; Buffett himself was educated in economics at the Wharton School at the University of Pennsylvania, earning a Master's degree in economics from Columbia University.

Biographer Roger Lowenstein says that even from youth, Buffett's mind was more suited to rationalism that to superstition:

Warren's exploits were always based on numbers, which he trusted above all else. In contrast, he did not subscribe to his family's religion. Even at a young age, he was too mathematical, and too logical, to make the leap of faith. He adopted his father's ethical underpinnings, but not his belief in an unseen divinity.[1]

Wood, intrigued that Buffet had read the Bible three or four times and remained agnostic, could not resist trying to convert him. They had the usual debates about faith and the afterlife, but Buffet was immovable. For every argument that Wood raised, Buffet had a deadly logical response.[2]

Buffett is a fan of the mathematician, philosopher and atheist Bertrand Russell. Lowenstein recounts Buffets sympathy with Russell's social agenda: "An agnostic like Russell, and deeply aware of his mortality, Buffett thought it was up to society, collectively, to protect the planet from dangers such as nuclear war."[3]

Warren Allen Smith, in over six decades of correspondence asking people if they believe in God, culminating in his 2000 book Who's Who in Hell, got the following one-word answer from Warren Buffet, scrawled on a postcard: “Agnostic.”[4] In 2011, on CNBC’s “Squawk Box” TV segment, Buffet responded to questions about the value of the US Dollar in an interview with Becky Quick: “… on the back of the US dollar it says ‘in God we trust.’ And if Elizabeth Warren were in charge of the government printing office I think it would have to say "in government we trust" because that is all there is behind paper money.” [5]