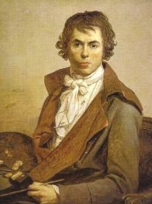 On this date, August 30, 1748, that the most important European painter of the French Revolutionary period, from 1785-1815, Jacques-Louis David, was born into the Parisian merchant class. David's father must have been both prideful and foolish, because he died in a duel when his son was 10. Educated at the Académie Royale from age 16, David took the Prix de Rome at age 26 (1774), after losing on his first three attempts.

Although educated in the rococo style, David adopted a neoclassical style, then moved on to a realistic style of painting to document the French Revolution, beginning in 1789. Indeed, "...it was David's forceful mind, virile talent, and revolutionary spirit which forged neoclassic art into a potent propaganda weapon – the 'Sword of the Revolution,'" according to biographer David Lloyd Dowd.[1] David was one of the organizers of French treasures for the Louvre museum.

He was elected a deputy to the National Convention on 17 September 1792 and organized many of its pagan festivals during a time when religion fell into wide disfavor. Unfortunately, David sided with the Montagnard extremists, such as Danton, Marat and Robespierre – and voted for the execution of Louis XVI. David was more eloquent as a painter than as a speaker, but agreed philosophically with the atheist Denis Diderot,[2] according to biographer Anita Brookner. Perhaps he had a higher regard for beauty and his own survival than for philosophical consistency; David has been variously described as a sycophant, a collaborator, and a pragmatist.

When Napoleon came to power, David threw himself into the service of the Emperor (1797-1815) and was celebrated by him as a reward. When the clerical-royalist restoration toppled Napoleon, David was imprisoned, but his loyal students (at times including Jean-Auguste-Dominique Ingres and François Gérard) demanded his release. He was freed on 28 December 1794 due to their entreaties. His defense at trial was characteristically Romantic: "[M]y crimes, in effect, were horror of tyranny and oppression, hatred of ambition, injustice, falsehood, and charlatanism," he said. "The day is no more pure than the depth of my heart."[3]

Threatened by the vindictive clerical-royalist reaction after the Revolution, David chose banishment over execution. He fled with his wife to Brussels, never to return. He died there on 29 December 1825. The reactionary government was so fearful of his following that they would not allow his family to bring David's body back to France for burial.

NB: You can see many of David's paintings on the Web at Olga's Gallery.

Desiderius Erasmus (1466) It was on this date, October 27, 1466, that the Dutch author, and the greatest humanist scholar of the northern Renaissance, Desiderius Erasmus was born Gerrit Gerritszoon in Rotterdam, in what is now the Netherlands. He was the product of a liaison between a housekeeper-niece and a Dutch priest. Ordained a priest […]