August 29: The Reasonableness of John Locke 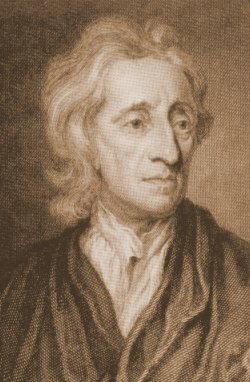 It was on this date, August 29, 1632, that English philosopher John Locke was born in a village in Somerset, into a Puritan family. Locke was barely 10 when the English Civil War heated up, although it did not interfere with a sound education: he graduated Oxford and performed medical research before becoming a government employee, through Lord Shaftesbury's influence, and a political philosopher.

His official position enabled him to live at Montpellier, where he wrote one of his most famous works, the 1690 Essay Concerning Humane Understanding. Locke's life coincided with the Puritan era in England: major fighting in the Civil War ended in 1660, the Protectorate under Oliver Cromwell ended within a year of the Puritan Lord Protector's death, but the questions over which the war was fought – religious toleration and the role of Parliament vs. that of the king – were not settled until the Glorious Revolution of 1688.

If the Civil War demonstrated anything to Locke, it demonstrated that religion made politics deadly divisive. Locke was opposed to authoritarianism, yet he believed strongly in the existence of God, a contradiction that fails to disturb some thinkers to the present day. But though Locke supported the suppression of Atheism, his Essay had argued against intuitive knowledge and innate morality, which is the first step toward rejecting a belief in God. It is doubtful that he believed in an immortal soul. If Locke was in any way skeptical, he was skeptical about the possibility of religious knowledge:

Nothing that is contrary to, and inconsistent with, the clear and self-evident dictates of reason, has a right to be urged or assented to as a matter of faith. ... Faith, on the other side, is the assent to any proposition not thus made out by the deductions of reason, but upon the credit of the proposer, as coming from God, in some extraordinary way of communication. ... Every sect, as far as reason will help them, make use of it gladly; and where it fails them, they cry out, "It is a matter of faith, and above reason."*

As for suppressing other religions, Locke distinguished himself in the aftermath of a civil war fought over a prayer book by writing several Letters Concerning Toleration – which he published without his name attached. Locke had spent some time in the nearby Dutch Republic, so he had some experience with a state tolerating cohabiting religions. Doubtless based on his observation of the time in which he lived, Locke strongly advocated separation between religion and government:

However, that some may not color their spirit of persecution and un-Christian cruelty with a pretense of care of the public weal ... I esteem it above all things necessary to distinguish exactly the business of civil government from that of religion, and to settle the just bounds that lie between the one and the other.**

Locke's 1695 work, The Reasonableness of Christianity, promoted the ethic of Christianity, but reduced its doctrines to the bare minimum. And he maintained that religious opinion could not be legislated or coerced. Furthermore, Locke thought sovereign power should derive from the governed and not from the divine right of a king. In this he might be called the inspiration for the US government that would take shape less than a century later.

John Locke died on 28 October 1704, at age 72. He once said, "How any man who should inquire and know for himself can content himself with a faith or belief taken upon trust, is to be astonishing."†