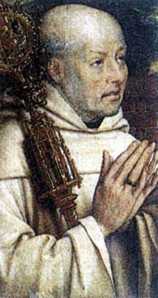 It was on this date, August 21, 1153, that Bernard of Clairvaux, canonized a Catholic "saint" in 1170 by Pope Alexander III, died in the Cistercian monastery of Clairvaux, in France. Bernard was born in 1090, at Fontaines, near Dijon, France, and at age 25 was entrusted with the brand new monastery of Clairvaux, on the 25 June 1115. Aside from the possibility of homosexual liaisons, it was quite easy to avoid worldly temptation within monastery walls and Bernard was said to have distinguished himself in piety and asceticism – so much of the latter, says the Catholic Encyclopedia, that he endangered his health. Still, he lived an unusually long life for the brutal Dark Ages, dying in the 63rd year of his age.

What is saintly character? The term is remarkable flexible. A large number of the early Christian saints and martyrs are completely fictitious. Through the Middle Ages – an eleven-century period that included the Dark Ages, when the church had its most power and least dissent – the population grew and the number of saints declined. Very few medieval Catholics followed the examples of great saints, such as Benedict II, Dominic, Francis, Gregory I, Hildebrand and Innocent I. Could it be that humanity would rather be playful than pious, big-hearted rather than bigoted, smiling rather than stern?

Sainthood in modern times is both political payoff and profit center for the Roman Catholic Church. France got her Joan of Arc, although she was quite probably a witch, and England got her Thomas More, in spite of his anti-clerical classic, Utopia. The sticker shock in England was profound: Thomas More's 1935 canonization cost over $24,000, besides over $7,000 for a souvenir (a solid gold chalice) for the Pope.*

Of course, the news media are not told that each nominee for sainthood has to arrive with literal proof of two miracles worked in his (or her) name – only that the candidate was of "saintly" character. In our own day, when miracles are objects of derision rather than of veneration, saints are as rare as black pearls.

And what does it take to get to this exalted state of sainthood? The saints we know about engaged liberally in self-torture, or "mortifying the flesh," to win their haloes, because a great reward in heaven was promised. How is this any different from the 19 Muslim hijackers of 9/11/2001, who sacrificed their lives to win a place in the Islamic heaven? Do we detect just a little self-interest?

The pope who sainted St. Bernard was unsaintly himself. Alexander III (Thomas Becket's pope) was elected, but modestly declared himself unworthy, so a rival agreed and forced his flight to France. Returning at the head of an army, Alexander's fight in St. Peter's left it "strewn with corpses." The Romans ejected him again, but Alexander brokered a deal, then for three years ruled the church unworthily – even the Catholic Encyclopedia admits Alexander had a "chequered career." The Romans neglected to mourn his passing.

So what sort of character would actually do humanity good? How about "a strict sense of justice, truthfulness, and honor, warm sentiments of friendliness and generosity, impatience of untruth and dishonesty, and a willingness to work for the betterment of the world"?** As numerous essays in this Freethought Almanac demonstrate Freethinkers, in proportion to their numbers, represent these characteristics better than believers. Perhaps the jibe of Ambrose Bierce, that a saint is "a dead sinner revised and edited," is true.

Sings McLachlan, without reservation, “The Father, Son, and Holy Ghost // Is just somebody's unholy hoax. // If there's one thing I don't believe in // It's you.”