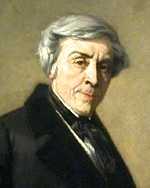 It was on this date, August 21, 1798, that French historian Jules Michelet was born in Paris, into a family with a Huguenot past. Of his youth, under the post-revolutionary, reactionary French government, Michelet recalled,

I remember that in the dire misfortunes of daily deprivation and fears for the future... unsure of just where our bread was to come from, with life apparently at dead end, all I felt in me was the stoic acceptance of life without religious hope, but even then, dead with cold, I struck down my hand on the oak table I still possess, and felt the virile joy of youth and of the future.[1]

After working with his father, a master printer, Jules passed the entrance exam for the Collège or Lycée Charlemagne, where he distinguished himself so admirably that, on his graduation, he was appointed to a professorship in history at the Collège Rollin. From his earliest years, Michelet was a Republican and a Freethinker, and wrote blisteringly anti-Catholic works: Histoire des Jésuites (History of the Jesuits, 1843), Du prêtre, la femme, et la famille (The Priest, the Woman and the Family, 1845), and others. The French government under Louis Philippe considered sanctions on Michelet for Du prêtre, a book criticizing the priesthood, and almost arrested him, but thought better of making a martyr of this popular historian.[2] The Roman Church paid Michelet the ultimate compliment: Du prêtre was placed on the Index of Prohibited Books.[3]

Popular he was, and a literary and historical groundbreaker, too. A witness to the 1848 revolution, Michelet published two multi-volume masterworks that transformed history from literature to near science: Histoire de France (18 vols., 1833-1866), a history of France, and Histoire de la révolution française (7 vols., 1847-1853). The latter attacks the Roman Catholic Church as anti-woman, anti-nature, anti-liberty and anti-justice.[4] And he invented the word "renaissance," meaning "rebirth." Both histories recounted French and revolutionary history in an evocative, picturesque style that won Michelet international applause.

Indeed, said Michelet in his history of the French Revolution, "in its struggle against the adoration of nature," which the Church equated with paganism, the Catholic priesthood "had condemned nature too much."[5] It is true that all Michelet's works reflected a thinly disguised Atheism and disdain for the Church in France. He gave a series of lectures against Jesuit control of public education, charging that Jesuit educators perfected "narrowing the heads of men and flattening their minds."[6]

Michelet once said, "The historian's first duties are sacrilege and the mocking of false gods. They are his indispensable instruments for establishing the truth." He died on 9 February 1874 in Hyères at age 75 and was interred in the Père Lachaise Cemetery in Paris. It was Jules Michelet who said, in the introduction to the 1869 edition of his history of France, "Man is his own Prometheus. There is no need for any faith but in humanity."[7]