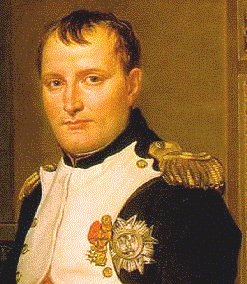 It was on this date, August 15, 1769, that Napoleone Buonaparte, later to become the French military leader Napoleon Bonaparte, was born in Ajaccio on the Mediterranean island of Corsica, now part of Italy. He entered a Parisian military academy and rose quickly to become one of the greatest military commanders in history. His studies, says the Catholic Encyclopedia, "left him attached to a sort of Deism, an admirer of the personality of Christ, a stranger to all religious practices, and breathing defiance against 'sacerdotalism' and 'theocracy'."

Though criticized by many as a conqueror, Napoleon said that he was a liberator of feudal Europe, and that he united peoples under liberal governments. Napoleon concentrated power in his own hands, but also granted to his conquered nations such novelties as constitutions, law codes, efficient governments and universal education, while promoting science, literature and the arts.

Although he was contemptuous toward the Papacy (and the Jesuits), Napoleon was far from anti-Catholic. Indeed, he saw the Roman Church as an excellent prop to his political power and always spoke publicly as an orthodox Catholic. The Catholic Encyclopedia says, "Napoleon was not an unbeliever; but he would not admit that anyone was above himself, not even the pope." That he demonstrated at his 1804 coronation, when he wrested the crown from the hands of Pope Pius VII and placed it on his own head. Five years later, when Napoleon's army had seized Italy, the Pope excommunicated him rather than submitting. "In these enlightened days," smirked the Emperor in response, "none but children and nursemaids are afraid of curses."

Napoleon's restoration of the Catholic Church in post-Revolutionary France was an act of political expediency that helped him as much as it helped the Church. "Religion is excellent stuff for keeping common people quiet," he once said. When the Emperor was finally defeated and sentenced to his second exile, on the desolate island of St. Helena, under watchful eyes, his conversations were recorded by Lord Rosebery. Napoleon in exile and out of power was far more candid about the purely political and utilitarian character of his profession of religion.

From an impartial study based on conversations at St. Helena, where Napoleon spent his last six years, Rosebery concludes that the exiled Emperor was more skeptical in his later years, perhaps because he had more time for reflection: Napoleon did not believe in the divinity of Christ, or in a future life, and doubted the spirituality of the mind. Instead he believed, "All religions have been made by men."**

When Charles François Dupuis, author of The Origin of all Religious Worship, reproached Napoleon for reinstating Catholicism in France, Napoleon said that "as for himself, he did not believe that such a person as Jesus Christ ever existed; but as the people were inclined to superstition, he thought [it] proper not to oppose them."†

Three weeks before his death, Napoleon was reported to have said, "I am neither an atheist nor a rationalist; I believe in God and am of the religion of my father. I was born a Catholic and will fulfill all the duties of that church."‡ Although the Catholic Encyclopedia gleefully reports that Napoleon asked for clerical ministration at the end, what the venerable Catholic apologists do not report is the excuse Napoleon gave for calling on a priest as he lay dying. It was, as Napoleon said, because "there is so much that one does not know." From the Catholic point of view, this rationale is agnostic.