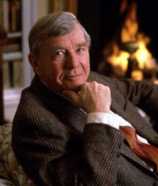 It was on this date, August 14, 1925, that US journalist, humorist and biographer Russell Baker was born in Loudon County, Virginia. His father died early on and his hard-working mother reared him and his sisters during the Great Depression. Baker managed to get himself into Johns Hopkins University, where he studied journalism.

Baker's wit as a humorist has been compared with that of Mark Twain. "The only thing I was fit for was to be a writer," wrote Baker, "and this notion rested solely on my suspicion that I would never be fit for real work, and that writing didn't require any." In 1979, Baker received his first Pulitzer Prize for distinguished commentary in his "Observer" column for the New York Times (1962 to 1998). His 1983 autobiography, Growing Up earned him a second Pulitzer. In 1993, Baker began hosting the PBS television series, Masterpiece Theatre.

Baker writes in his memoir Growing Up, that he lost his faith in God following his father's death:

After that I never cried with any real conviction, nor expected much of anyone's God except indifference, nor loved deeply without fear that it would cost me dearly in pain. At the age of five I had become a skeptic and began to sense that any happiness that came my way might be the prelude to some grim cosmic joke.[1]

One of the many burdens of the person professing Christianity has always been the odium likely to be heaped upon him by fellow Christians quick to smell out, denounce and punish fraud, hypocrisy and general unworthiness among those who assert the faith. In ruder days, disputes about what constituted a fully qualified Christian often led to sordid quarrels in which the disputants tortured, burned and hanged each other in the conviction that torture, burning and hanging were Christian things to do...[2]