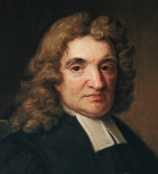 It was on this date, August 10, 1675, that, by order of King Charles II, the foundation stone of the Royal Observatory at Greenwich, south London, was laid. The rationale was chiefly commercial: to improve knowledge of the positions of stars in order to aid navigation. The first Royal Astronomer was a 29-year-old Rev. John Flamsteed (1646-1720). Flamsteed worked from a hilltop house designed by Christopher Wren (1632-1723) – himself an astronomer – until the year before his death in 1720. But even in their time the churches, both Catholic and Protestant, were unready to relinquish their hold on not only how to go to heaven, but how the heavens go.

The telescope came into use within the last 60 years, after Galileo (c. 1610) improved on a Flemish spectacle-maker's invention, thereby improving on Tycho Brahe's naked-eye observations of the heavens. Although generally accepted in learned circles – which until the late Middle Ages, the Renaissance and the rise of commerce meant ecclesiastical circles – that "the heavens declare the glory of God..." (Psalm 19:1), it took a long and dangerous struggle for astronomers to declare finally, in words that Laplace probably didn't say to Napoleon, that they could "do without that hypothesis."

Believing that the world would soon end, the early church was indifferent to "how the heavens go." Augustine wrote in the 5th century, "What concern is it to me whether the heavens as a sphere inclose the earth in the middle of the world or overhang it on either side?" The universe was created by God (Genesis 1:1, 14-16). The Bible described the heavens as a solid hemisphere, a "firmament," from which angels hung the greater and lesser lights – the sun, moon and stars.

The earth stood, immobile, at the center of the universe (I Chronicles 16:30; Psalms 93:1; 96:10; 104:5; Joshua 10:12-13) and this "Ptolemaic theory," based on the revered writings of Claudius Ptolemy (85-165 CE) and his predecessor Aristotle (384-322 BCE), became the sacred science of the Christian churches. The greatest Christian theologian of the Middle Ages, Thomas Aquinas, codified all this in his Summa Theologica (completed 1274, published 1485). To speak in contradiction to this interpretation of the Bible was to speak against Christianity itself. Giordano Bruno learned this when he was burned in 1600. Galileo learned it when he was threatened with torture, then compelled to recant on his knees in 1633.

It was Galileo's telescope that showed the imperfection of the heavens: the sunspots on the sun, the valleys and mountains on the Moon, and the moon-like phases of Venus. In the ancient world, Pythagoras, Philolaus and Aristarchus had reasoned out a sun-centered universe, but that knowledge was suppressed by superstition until Nicolaus Copernicus (1473-1543) modernized it in the 16th century. Later astronomers showed that Genesis could not be right:

GENESIS DAY TWO- Creation of water — before the sun (Genesis 1:6-8)
ASTRONOMY: Evolution of the stars and sun

GENESIS DAY THREE: Creation of plants — before the sun (Genesis 1:9-13)
ASTRONOMY: Evolution of the earth and moon

GENESIS DAY SEVEN: Creation ceases for all time
ASTRONOMY: Continued evolution of stars, planets, plants, animals and — for all we know of the universe — sapient life forms

By the time the Royal Observatory was built, most of the erroneous cosmology was not only disproved but no longer defended by church authorities. The only hold-outs appear to be so-called creationists, who cling to the tattered remains of Biblical inerrancy as a defense against the indifference to God of the methodological naturalism and empiricism that makes modern science (and, indeed, modern life) possible.

As if driving the final nail into the coffin of a supposedly designed universe, Carl Sagan wrote, in his introduction to Steven Hawking's Brief History of Time, that the book speaks "about God, or perhaps about the absence of God," and that today's astronomy envisions "a universe with no edge in space, no beginning or end in time, and nothing for a Creator to do."*