The following is a commentary in an ongoing series of “Reflections” by John Mill. John Mill is the radio persona of Ronald Bruce Meyer and can be heard on “American Heathen.” “The American Heathen” Internet radio broadcast is aired, live, on Friday nights from 7:00pm-10:00pm Central time on ShockNetRadio.com

A Reflection by Ronald Bruce Meyer

I’m sitting here at a traffic light in Baltimore, hurrying to get who-knows-where, and listening to the radio. Republicans calling Democrats soft on defense or in favor of a government take-over of this or that. Democrats calling Republicans toadies to big business, big banks, big pharma, and exporters of American jobs. Name-calling. Blame. Invective and vituperation.

Except… I glance over to my left at the guard rail glistening silver in sunlight. And I catch my breath. I have to admit, I have not become as blasé about the decline of people’s ability to get along that I cannot, once in awhile, be shocked. What I read there, in stark black letters from some black pen graffitist, are three words: 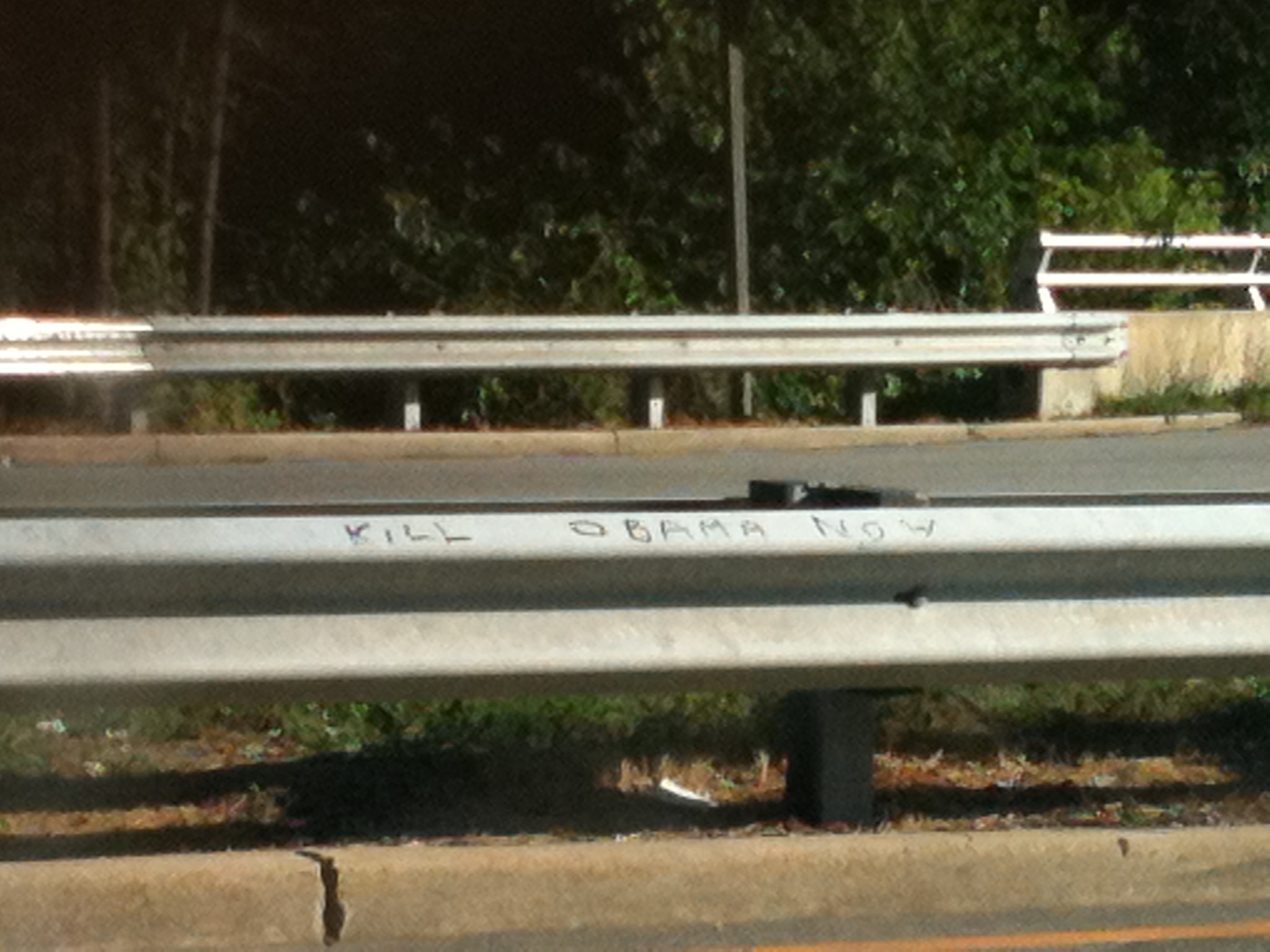 We vote them out; we don't "take them out"

It’s not because I voted for the guy that I feel sad and a little angry. I’ve been disappointed time and again by Mr. Obama: by the crash of the hopeful surf against the rocks of reality. I just don’t think I remember anything as hateful regarding any president before Obama.

And sure, there have been lots of attempts and potential attempts on the lives of presidents before Obama. Why did that graffiti bother me so? Is it a black thing? There is a lot of evidence that opposition to and criticism of Mr. Obama is race-based. Many people in this country cannot accept, or perhaps cannot believe, that a back man is running the most powerful country in the history of the world – and only 148 years after slavery ended in the same country!

What is it about the current President that would drive a person to tell another person to kill him? Is Mr. Obama some kind of monster? A Socialist? A Nazi? A Muslim? An atheist? And if any of these are true, how was it that 53% of the country chose the black guy over the angry white guy (and the ditsy beauty queen)? That’s a better margin than George W. Bush ever got. Or Bill Clinton.

The only explanation I can think of is tangentially related to religion. Now hear me out on this. The right wing, especially, is perfecting the rhetoric of “you’re not just wrong, you’re evil.” And the best excuse for a king on earth is a king in heaven. The only conclusion I can draw is that the right wing, far from supporting democracy, far from even “getting” democracy, really misses the era when countries had kings.

Because how else can you explain committing an assassination in the hope of changing the country itself? Do these people truly believe that, in a representative democracy, you can change the government by lopping off its leader?

Obama is not a king, folks. He’s a man. A black man, yes, but he doesn’t have magic powers. He’s demonstrably not superman. He’s amazingly, even disappointingly, moderate. And – just so you don’t forget – in a democracy, we vote presidents out, we don’t “take them out.”

It reminds me of that news story about the rise of militia activity coincident with the presidency of a the current Democrat – a phenomenon that does not, for some reason, occur under Republican presidents: the writer of the news story called these gun-toting, anarchistic, Christian predators “patriots.” This is the type of “patriot” who would consider it their god-given duty to commit a coup d’etat.

In what sense are they patriots? It seems the only part of the constitution they respect is the Second Amendment. Maybe they should stay hidden in the hills until they finish reading the Constitution. After they learn to read.