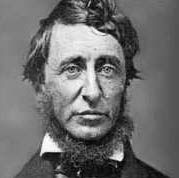 It was on this date, July 12, 1817, the writer and philosopher Henry David Thoreau was born in Concord, Massachusetts. He graduated Harvard in 1837 and discovered a talent for writing about nature. Thoreau embraced the Transcendentalist belief in personal insight and experience, but he was neither a critical nor a consistent thinker on religion. He was friends with Ralph Waldo Emerson, sharing his nebulous Pantheism — a "defiant Pantheism" that, according to Horace Greeley, got some of his writings rejected by mainstream publishers. Woodbury says Thoreau was fond of quoting the line of the Roman poet Ennius, "I say that there are gods but they care not what men do.[1]

Thoreau supported himself by writing and at the family business of manufacturing pencils. From 1845 to 1847, Thoreau lived on the edge of Walden Pond near Concord. Gleanings from his journals composed there he published in his masterwork, Walden, or Life in the Woods, in 1854.

Although Thoreau lived what might be called a spiritual life, eschewing material possessions, his belief in the soul was not of the Christian variety, his belief in God was of the God-in-the-Cosmos variety, and when he spoke of God, he could be speaking of the human will, or of nature, or of the Κοσμος (Cosmos), but not of a personal deity. For example,

My profession is to be always on the alert to find God in nature, to know his lurking-places, to attend all the oratorios, the operas, in nature ... The love of Nature and the fullest perception of the revelation which she is to man is not compatible with the belief in the peculiar revelation of the Bible.[2]

In these lines, from "Autumnal Tints," Thoreau seems to reject a belief in immortality:

It is pleasant to walk over the beds of these fresh, crisp, and rustling leaves. How beautifully they go to their graves! ... They teach us how to die. One wonders if the time will ever come when men, with their boasted faith in immortality, will lie down as gracefully and as ripe, with such an Indian-summer serenity will shed their bodies, as they do their hair and nails."[3]

Furthermore, Thoreau said, "Jesus Christ ... taught mankind but imperfectly how to live; his thoughts were all directed to another world. There is another kind of success than his."[4] Thoreau disliked churches and ignored most aspects of Christian theology, says biographer Edward Wagenknecht.

Thoreau also wrote vigorously in defense of civil liberties in his 1849 essay "On the Duty of Civil Disobedience." The essay was inspired by a night spent in jail for failure to pay a poll tax — a tax on voters later declared unconstitutional. In "Civil Disobedience," he wrote, "I did not see why the schoolmaster should be taxed to support the priest, and not the priest the schoolmaster." As an abolitionist, Thoreau took an active part in the Underground Railroad to free escaped slaves.

As he neared death in Concord, on 6 May 1862, an aunt asked if he had made his peace with God. Thoreau replied, "I did not know that we had ever quarreled." A friend asked his thoughts on the afterlife, to which Thoreau replied, "One world at a time."