It was on this date, July 9, 1850, that a 30-year-old Persian religious reformer, known as the Báb, was executed by firing squad in Tabriz, Persia, which is now Iran. He was born Siyyid `Alí Muḥammad Shírází (Persian: سيد علی ‌محمد شیرازی) in Shiraz on 20 October 1819. His father, a local merchant, died shortly thereafter. Raised by his uncle, also a merchant, Ali-Muhammad was educated in religious schools and eventually joined his uncle in the family business, a trading house in Shiraz.

The life of the Báb gives us an interesting illustration of how miracles and legends can attach themselves to recent historical figures, much as details of the life of Jesus multiplied after his contemporaries died. Ali-Muhammad became a disciple of Siyyid Kázim of Rasht, who was the leader of a sect of millennialist Shiite Muslims called the Shaykhis. The Shaykhi's beliefs predicted the imminent appearance of the "Lord of the Age" (Sáhibu'z-Zamán), a prophet of God. On 23 May 1844, after the death of Siyyid Kázim, Ali-Muhammad proclaimed himself the Báb (Arabic: باب), "the Gate" (of God).

He attracted followers with his undogmatic, ethics-based monotheism, a syncretism of Judaism, Christianity and Islam that did not require priests or include a belief in personal immortality. The Báb's six-year ministry attracted the ire of orthodox Muslims. The priests accused the Persian preacher of apostasy and got him arrested. Three years later the Báb and twenty-eight of his disciples were executed for their beliefs. 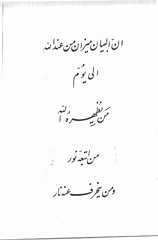 Compare this biographical narrative: Jesus broke from an orthodox upbringing to become a preacher, espousing what has come down to us as a syncretism of (the worst elements of) Judaism, Zoroastrianism and paganism. His ministry was brief, at the end of which the angry priests persuaded the authorities to execute him.

In both cases, the myth-making began shortly after the preacher died. The Báb's biography was published three years later, with a straightforward narrative. But within twenty years his biography included myths and miracles, such as this one:

[The head prison attendant] found the Báb speaking privately with Siyyid Husayn, who acted as His secretary. [He] pulled Siyyid Husayn aside and reprimanded him. Hearing this, the Báb warned, "Not until I have said to him all those things that I wish to say can any earthly power silence Me."

... [T]he Báb and Muhammad-'Alí were brought into the courtyard... A regiment of seven hundred fifty soldiers... formed the firing squad. ... About ten thousand spectators lined the rooftops of the barracks and adjoining houses as the [soldiers fired]. The smoke from the guns was so thick it momentarily darkened the sky and obscured the view of the condemned.

When the smoke cleared, the crowd was stunned to find the Báb gone and Muhammad-'Alí standing unscathed on the ground! ... A frenzied search was mounted to locate the Báb. When they found Him, He was seated in the room He had occupied the night before, finishing His interrupted conversation with Siyyid Husayn.*

There are many other legends surrounding the Báb, which demonstrate that it is entirely possible, even in our well documented age, for later generations to embellish a life to convert unbelievers — just as was done with Jesus. In the century and a half since its founding, the religion which became Bahá'í claims to have acquired over five million followers — a figure almost certainly inflated, in the tradition of other religious statistics.

Bahá'í seems to embrace many liberal principles: the elimination of racial and ethnic prejudice, leveling extremes of wealth and poverty, promoting the equality of women, universal education and world peace. But, as many of the pages from this Freethought Almanac have shown, these ends can be achieved without reliance on prayer or gods or superstitious beliefs. In fact, the Báb might have lived longer had he worked for these causes without starting a religion!

* Quoted from the Planet Bahá'í website, which explicitly draws parallels between the life of the Báb and the life of Jesus. The official Bahá'í website compares the Báb to John the Baptist. There is a (somewhat) helpful pronunciation guide at this link.