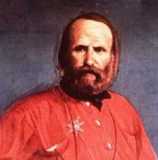 It was on this date, July 4, 1807, that Italian liberator Giuseppe Garibaldi was born in Nice (a formerly Italian city). The son of a sailor, he was urged toward the priesthood and, to escape a priestly education, Garibaldi went to sea, becoming a merchant captain in 1832. His Italian Republican leanings were encouraged by his association with Giuseppe Mazzini (1805-1872) at the Young Italy headquarters in Marseilles. He spent many years in South America fighting the priest-dominated dictatorships there, but he also met and married his revolutionist soul-mate, the beautiful, Brazilian-born Anita. She proved to be just as brave in battle as her husband.

Garibaldi returned to Italy in 1848. After Pope Pius IX refused his services — Pius was as strong an opponent of Italian unity as Garibaldi was an exponent — he took on the Austrians and French. A papal army of 100,000 chased Garibaldi out of Italy and, in the battle, his pregnant wife Anita was killed. He returned to Italy, was arrested and deported. Ten years later, Garibaldi finally won a unified Italy for Victor Emanuel. He was rewarded with a seat in the Italian Parliament.

In 1861 President Lincoln offered Garibaldi a command in the Union Army during the Civil War, but a Vatican protest forced Lincoln to withdraw the offer. Although Queen Victoria snubbed him, Garibaldi received a hero's welcome in England. He was called the "Hero of Two Worlds" for his military successes in both South America and Europe. To stir the troops prior to reclaiming the Papal States for Italy, Garibaldi wrote:

In the midst of Italy, at its heart, there is a cancer called Popery,— an imposture called Popery. Yes, young men, we still have a formidable enemy, the more formidable because it exists among the ignorant classes, where it rules by falsehood.

Although Mazzini mentored him, he seemed disappointed in Garibaldi's frank Atheism and scorn for the Church. In a letter Garibaldi wrote two years before his death, on 2 June 1882, and bluntly said, "Dear friends — Man created God, not God Man. Yours ever, Garibaldi."

* Garibaldi proposed to an International Congress for Peace at Geneva, in 1867, the following language: "[6] The papacy, being the most harmful of all secret societies, ought to be abolished" and "[8] The priesthood of revelation and of ignorance should be replaced by one of wisdom and intelligence." That he likewise suggested [7] "I propose that this present Congress should formally adhere to the religion of God, by which I mean those elements of religion that are demonstrably true and reasonable (Scripture alone), and we should pledge ourselves to propagate it," may be explained as the public profession of piety by a politician who recognized that the majority would not follow him if he led them into Atheism, only into Republicanism — but he was nevertheless a sincere opponent of superstition. (Giuseppe Guerzoni, Garibaldi: con documenti editi e inediti (with published and unpublished documents), Florence, 1882, Vol. 11, 485.)
** Garibaldi is said to have made the following statement about his religious beliefs:

It is in vain that my enemies try to make me out an atheist. I believe in God. I am of the religion of Christ, not of the religion of the Popes. I do not admit any intermediary between God and man. Priests have merely trust themselves in, in order to make a trade of religion. They are the enemies of true religion, liberty, and progress; they are the original cause of our slavery and degradation, and in order to subjugate the souls of Italians, they have called in foreigners to enchain our bodies. The foreigners we have expelled, now we must expel those mitered and tonsured traitors who summoned them. The people must be taught that it is not enough to have a free country, but that they must learn to exercise the rights and perform the duties of free men. Duty! duty! that is the word. Our people must learn their duties to their families, their duties to their country, their duty to humanity.

The text quoted was published in 1870 (Giuseppe Garibaldi, The Rule of the Monk; or Rome in the 19th Century, London, 1870, Vol. II, p.91.), the year of the victory of the Republican forces over the clerical-royalist forces in Italy. Garibaldi made his profession of disbelief ten years later, when victory was established and there would be no repercussions from such frankness.

Socialists had a sort of religion to begin with. “Have we not that which forms the strength of religion,” Liebknecht pointed out, “faith in the highest ideals?”