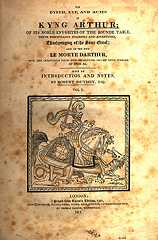 It was on this date, July 31, 1485, that the source of the Arthurian legends as we know them today, eight romances known as Le Morte D'Arthur, was published in London.* The work was written by Sir Thomas Malory (c 1405-1471) and was published by the father of printing, William Caxton (1422?-1491). Malory is a mystery, but it seems he was himself a knight, and spent the last 20 years of his life in and out of prison for various crimes, such as extortion, robbery, poaching, and murder – hardly an exemplar of chivalry. Creed being valued more than conduct, Malory is of course claimed among the faithful by the Catholic Encyclopedia.

Malory completed his Morte D'Arthur while in prison, in 1469 or 1470. He died in 1471, so he never saw the first edition brought out by Caxton 14 years later. The Book of King Arthur and His Noble Knights of the Round Table, as Malory originally called it, shows off the religious and chivalric ideas of an age gone by – at least as its author imagined them.

The "Age of Chivalry," which has been relentlessly romanticized in pious literature, presumably lasted from 1100 to 1400 in England, France, Germany, Italy, and Spain. Chivalry in myth – especially as outlined by historian Léon Gautier in 1891 (see below) – was a time of deep religious faith, respect for the weak, bravery in battle, veneration of women, generosity of spirit, truth and justice.

The chivalric code, according to
Chivalry by Léon Gautier (1891):

Chivalry in fact was invented in the 1600s by two genealogists and sycophants to the French court: Jean Vulson de la Colombière and Claude-François Menestrier.** No contemporary chronicler mentions a knight-errant, the religious orders of knights (such as the Templars) never failed to become corrupt, and those who are touted as exemplars of chivalry – such as Richard the Lion-Heart and the Cid – were known to their contemporaries not as paragons of chivalry but as vicious and deceitful.

This may come as a revelation to those who think morality is on the decline in the world today, but during the “Age of Chivalry” the noble and knightly classes of both sexes were saturated with sexual vice and violence, brigandry and theft, and uncommon corruption. Serious scholars describe the age as the worst period for morals in the history of civilization.† And, of course, everyone went to church! You might conclude that if the “Age of Chivalry” was the apotheosis of Christianity, then gentle Jesus was a rascal.

"I think of myself as an agnostic, but an agnostic is really a cowardly atheist," said Terkel.