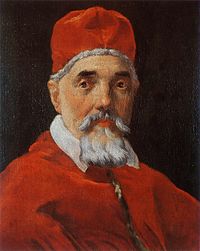 It was on this date, July 29, 1644, that the pope who will be remembered throughout history as the persecutor of Galileo, Urban VIII, died at Rome. It had been 18 months since his victim had died in Florence, while under a house arrest, which Urban did nothing to mitigate.

Born Maffeo Barberini in Galileo's ancestral home of Florence, on a date uncertain in April 1568 (four years after Galileo’s birth), the future pope was reared among the wealthy and privileged. His early education was by Jesuits. Barberini learned literature but loved law, taking a degree in Pisa, where Galileo spent his early years. Barberini advanced in the ecclesiastical hierarchy: in 1604 he was appointed Archbishop of Nazareth at age 36; Pope Paul V made him cardinal-priest in 1606, then legate of Bologna in 1617. On the death of Gregory XV, Barberini was elected pope in 1623 at age 55.

He took the name Urban VIII and immediately, while the Thirty Years' War raged between Catholics and Protestants in Europe, canonized Ignatius of Loyola. Ignatius, of course, founded the Jesuits, who incited the Thirty Years' War. As for Urban and Galileo, the Catholic Encyclopedia can barely begrudge a mention of the savaging of the scientist, for which Urban is directly responsible, and one Catholic apologist website has the temerity to write:

Urban ... is connected with the famous condemnation of Galileo. The imprudent astronomer had been lured by his enemies on to the field of theology and as a result had been condemned by a commission of the Holy Office. He gave in, however, and suffered small inconvenience in a sort of house arrest. The affair was unfortunate; for though papal infallibility was not involved, papal prestige was. And the more the Copernican theory was accepted, the more the condemnation of Galileo gave a pretext to rationalist calumnies that the Church is opposed to science.*

It takes great skill to assemble so many distortions into so few words. Urban was hated by the Romans for his nepotism. Where Galileo was accomplished, Urban was a dilettante in art and science – which everyone knew but were too polite to point out. Far from being a friend to Galileo, Urban directed his every punishment. This "haughtiest of pontiffs"** took great offense at having his arguments against the Copernican system annihilated by Galileo (Dialog, 1632). The "imprudent" Galileo showed the world that those who agreed with Urban were clueless about astronomy and mathematics.

Yes, he "gave in." That Galileo escaped torture by the Inquisition was not due to the pope's intervention but to Galileo's fragile health: the 69-year-old would not have survived it. The contemporary documents show that "he was menaced with torture again and again by express order of Pope Urban."** Galileo's "small inconvenience," as the apologist puts it, was for the world-renowned scientist, already ailing and nearly blind, to be confined to his home and forbidden to teach and write what he knew to be true – and what he had demonstrated to be true. If this is not evidence of a Church "opposed to science," was there anything in Urban's treatment of Galileo that promoted his science?

As for papal infallibility, the apologist's statement is doubly laughable: First, the documentary history shows that Galileo's "errors" were always referred to as "heresy," and that these errors were condemned not by the pope alone, but by pope and Church. Second, the doctrine of infallibility was not pronounced until 226 years after Urban's death – and the definition of infallibility was carefully crafted to exclude such gross blunders as the Church's treatment of Galileo!

Urban ended his days in failure by pouring the papal treasury into his corrupt family's coffers, rather than financing the Catholic powers in the Thirty Years War. Even the Catholic Encyclopedia has to admit that "Urban's greatest fault was his excessive nepotism."

* The Catholic apologist website can be found at this link.
** Andrew Dickson White, Warfare of Science with Theology, 1895.