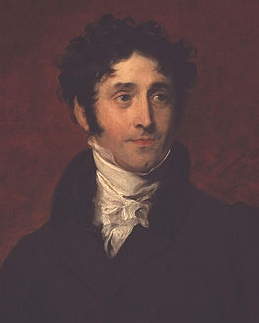 It was on this date, July 27, 1777, the Scottish poet Thomas Campbell was born in Glasgow, the youngest of the eleven children. Once destined for the ministry and the law, he studied at Glasgow and Edinburgh and became life-long friends with Walter Scott. In 1799 Campbell published a poem called “Pleasures of Hope,” a traditional 18th century didactic poem in heroic couplets, that drew wide praise. After his marriage in 1803, Campbell settled in London and produced other poems of note, many with a military theme, such as “Ye Mariners of England” and “Lochiel’s Warning.”

Other notable poems include “The Ballad of Lord Ullin's Daughter,” “Hohenlinden,” “Lines on Revisiting a Scottish River,” “Field Flowers,” “Song to the Evening Star,” “The Spectre Boat” and “The Lover to His Mistress On Her Birthday.” Thomas Campbell died on 15 June 1844 at age 66 in Boulonge, France. He was buried in the Poet’s Corner at Westminster Abbey. A statue of Thomas Campbell stands in George Square, Glasgow.

As most poets do, Campbell wavered between Theism and Agnosticism. He did not believe in a future life, and his poem “Hallowed Ground” contains a surprisingly skeptical opening stanza:

What’s hallowed ground? Has earth a clod
Its maker meant not should be trod
By man, the image of his God
Erect and free,
Unscourged by Superstition’s rod
To bow the knees?

… and continues with these lines of hope, not for a Christian immortality, but of an immortality every human can claim …

And is he dead, whose glorious mind
Lifts thine on high?—
To live in hearts we leave behind
Is not to die.

King told a German magazine that, yes, he can always learn something new. With one exception — if it comes to religious topics everything is already said. I am an agnostic, so I don't learn anything from them."