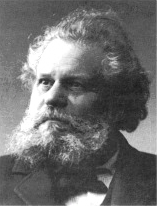 It was on this date, July 27, 1835, that Nobel-winning Italian poet Giosuè Alessandro Michele Carducci was born in Valdicastello, a small town in the Province of Lucca in the northwest corner of the region of Tuscany. He studied philosophy at the University of Pisa, was professor of literature at Bologna University, and became a leader of the realistic school of Italian letters.

In 1865, Carducci published a notorious poem called "L'inno a Satana," or "Hymn to Satan," which won him derision as a "praiser of Satan." But by co-opting what the corrupt clerical forces in Italy were going to call the reformers anyway, he shook up the anti-clerical movement which eventually won Italy back as a republic. He re-issued the poem on the opening day of the First Vatican Council in 1870, just to rile the righteous. The "Hymn to Satan" is really a "toast" containing such jabs as,

To you, creation's mighty principle,
matter and spirit, reason and sense ...
To you my daring verses are unleashed,
you I invoke, O Satan monarch of the feast.
Put aside your sprinkler, priest,
and your litanies!
No, priest, Satan does not retreat! ...
As Martin Luther threw off his monkish robes,
so throw off your shackles, O mind of man, ...
Hail, O Satan O rebellion,
O you avenging force of human reason!
Let holy incense and prayers rise to you!
You have utterly vanquished the Jehovah of the Priests.

As you can tell from this praise of rebellion against the priesthood, Carducci was not only a poet but also a politician, winning election to the Italian Senate in 1890. Though somewhat nervous at rewarding an Agnostic, Carducci won the Nobel Prize for Literature in 1906 – the first Italian to receive such an honor. Anti-clerical to the end, Giosuè Carducci said, "I know neither truth of God nor peace with the Vatican or any priests. They are the real and unaltering enemies of Italy."*