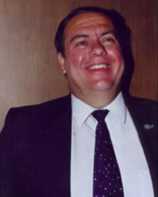 It was on this date, July 23, 1995, that Comet Hale-Bopp was discovered by Alan Hale and, independently, by Thomas Bopp. Working as a shift supervisor in a construction materials company, Bopp, an amateur astronomer, observed the celestial event in Glendale, Arizona. A professional astronomer, Alan Hale made his observations in Cloudcroft, New Mexico.

"I love the irony," said Hale. "I've spent over 400 hours of my life looking for comets, and haven't found anything, and now, suddenly, when I'm not looking for one, I get one dumped in my lap."

Hale took his physics degree at the US Naval Academy in Annapolis, MD, worked for a time at the Jet Propulsion Lab and on the Voyager 2 (Uranus) project, 1986, before earning his Master's (1989) and Doctorate (1992) at New Mexico State University. Hale worked at The Space Center in Alamogordo, New Mexico, before founding the non-profit Southwest Institute for Space Research in 1993, two years before he observed the comet that bears his name.

"Few sights in the nighttime sky can be more awe-inspiring than that of a bright comet," Hale wrote in The Skeptical Inquirer (March 1997).[1] But he warns that, contrary to the beliefs of our forbears, and to many modern religious believers, there is nothing supernatural or prophetic about comets, and it is useless to "invoke mythical beings for which there's no evidence" on account of them.[2] The Great Comet of 1680, for example, caused fright among the faithful: a handbill of the time "admonished Christendom to penance." Halley's comet in 1910 sparked public panic – and the hawking of "comet pills" to alleviate the supposed effects of its gassy tail. In 1973, the comet Kohoutek inspired certain religious groups to issue dire warnings of doom. 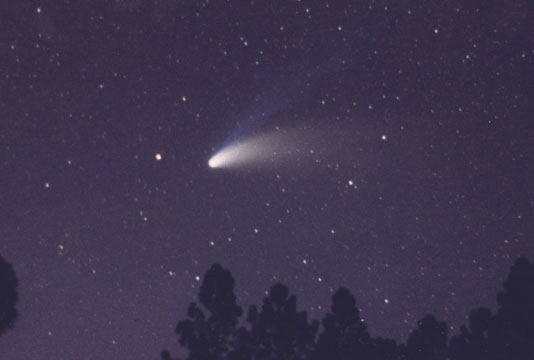 Comet Hale-Bopp stirred its own "comet madness," recalled Hale, principally because it appeared so close to the close of the millennium.[3] Far from being one of the "signs of the end times," or even the star "Wormwood" from Revelation 8:10-11, Hale-Bopp came nowhere near the earth at its closest (on 22 March 1997) – 122 million miles (197 million kilometers) from Earth. But the most dreadful effect of "comet madness" took place in Rancho Santa Fe, California: 39 members of the Heaven's Gate religious cult, each covered across the face and chest with a triangular shroud of purple cloth, committed suicide, "so that their 'inner beings' could rendezvous with another group of 'beings' on an alien spacecraft traveling alongside Comet Hale-Bopp." That was how Hale described it in a 1997 press conference.[4]

Agreeing with science writer Carl Sagan, that science is the only useful candle in this dark, demon-haunted world, Hale asked,

It should come as no surprise that Alan Hale is a supporter of Internet Infidels, the publishers of the Secular Web.[6]

[1] Alan Hale, Ph.D., "Hale-Bopp Comet Madness," Skeptical Inquirer, March 1997. Hale outlines his scientific method in a companion article in the same issue, "An Astronomer's Personal Statement on UFOs."
[2] Alan Hale, "E-Mail Conversation with a Creationist," published on the Internet Infidels website.
[3] Hale, "Hale-Bopp Comet Madness," ibid.
[4] Alan Hale, "Statement by Alan Hale on Heaven's Gate Mass Suicide," delivered at a press conference in Cloudcroft, NM, March 28, 1997, published in HB Magazine.
[5] Ibid.
[6] Internet Infidels is at this link. The support of Alan Hale is at this link. Hale points out that "my personal practice is not to criticize others' beliefs..." but he enjoys "the occasional jab at creationism and fundamentalism."

This Week in Freethought History (April 28-May 4)