July 19: Converting the Heathen in America 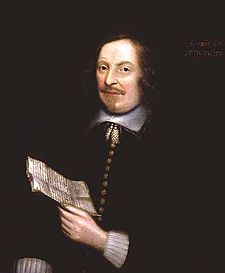 It was on this date, July 19, 1649, that Edward Winslow, governor of Plymouth Colony (in what is now Massachusetts) helped to organize the Society for Propagating the Gospel in New England. Winslow (1595-1655) had become the colony's main representative in England, when he wasn't service as governor, so the Society was formed while he was abroad, between terms. The purpose of the Society was to Christianize the native people who had helped the beleaguered colonizers through their first winter, in which Winslow lost his own wife.

Winslow's band of Separationists had sailed on the Mayflower, via the Netherlands, whose atmosphere was not quite repressive enough. Their destination was the New World, where they established their own theocratic settlement at Plymouth in 1620. That first winter saw the deaths of half their 102 intrepid colonists, but making nice with the heathen residents enabled them to survive past 1621 and realize Winslow's other motive: Christian missionary work. No doubt they thought they were doing their American Indian friends a favor.

It was typical arrogance to suppose that the imported superstitions were in any way superior to the home-grown variety, but the Puritans achieved success just as the early Roman Church Christianized the dissolving Roman Empire: through force and law. Did they ever understand the beliefs of those they presumed to convert? As Canadian Justice Thomas Berger noted almost 350 years later,

The culture, values and traditions of native people amount to more than crafts and carvings. Their respect for the wisdom of their elders, their concept of family responsibilities extending beyond the nuclear family to embrace a whole village, their respect for the environment, their willingness to share – all of these values persist within their own culture even though they have been under unremitting pressure to abandon them.*

The principal drive behind Christianizing the native people, aside from the cover story of saving their souls, has been to steal land for white settlements. This was ruthlessly accomplished through forced relocation (such as in the 1838 Cherokee "Trail of Tears"), suppression of tribal cultures and languages (for which at least the United Church of Christ apologized in 1991), and shipping Indian children to boarding schools for re-education (where stories of physical and sexual abuse eventually surfaced).

During the second half of the 19th century especially, Christianizing Indians turned aggressive. The Indian victory at Little Big Horn in 1876 was overshadowed by the collapse of resistance at Wounded Knee in 1890. US Indian Affairs Commissioners advocated the concentration of Indians on small reservations, more easily to control them, politically and economically. The native religions were crushed, even though they were comparatively harmless, as one author notes:

Rather than going to church, I attend a sweat lodge; rather than accepting bread and toast from the Holy Priest, I smoke a ceremonial pipe to come into Communion with the Great Spirit; and rather than kneeling with my hands placed together in prayer, I let sweetgrass be feathered over my entire being for spiritual cleansing and allow the smoke to carry my prayers into the heavens. I am a Mi'kmaq, and this is how we pray.**

In propagating their Gospel, Winslow and his fellow Christians – down to the 1978 American Indian Religious Freedom Act (Public Law 95-341) – were behaving in a conspicuously Christian manner toward heathens... with predictably disastrous results.

"If you take the Christian Bible and put it out in the wind and the rain," said one Native American woman, "soon the paper on which the words are printed will disintegrate and the words will be gone. Our bible is the wind."

Here’s your Week in Freethought History: This is more than just a calendar of events or mini-biographies – it’s a reminder that, no matter how isolated and alone we may feel at times, we as freethinkers are neither unique nor alone in the world. Last Sunday, July 22, but in 1822, Moravian monk and amateur […]