July 16: Putting the “Christian” in Science 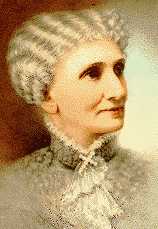 It was on this date, July 16, 1821, that Mary Baker Eddy was born near Concord, New Hampshire into a Congregationalist family. A sickly youth, Eddy studied alternative medicine, alongside the Bible, in search of a mind-body-Bible connection. Prompted by her supposed recovery from a life-threatening accident in 1866 through Biblical insights, in 1875 Eddy published the first edition of Science and Health with Key to the Scriptures. This book outlined her faith-healing system, in what she called "Christian Science."

In 1879, she founded her Christian Science church in Boston, Massachusetts. In 1908, at age 86, she founded the Christian Science Monitor which, in spite of the pseudo-science of its sponsoring sect, has won six Pulitzer Prizes. It is well known that in Science and Health Eddy plagiarized material from many sources, including Thomas Carlyle and John Ruskin. Eddy's system rejects the germ theory of disease, seeing sickness as the medieval Church did – as a manifestation of incorrect faith; as an illusion

But Christian Science is both logically and ethically flawed. If you take poison by mistake, say, does that still mean your faith was faulty? Babies get sick: how can their beliefs be incorrect? Animals get sick: is their faith defective, too? What about plants? It may be the lack of scientific and medical support for faith-based cures that has caused a precipitous drop-off in Christian Science membership since its peak in 1936 – or perhaps ignoring doctors is its own reward.

Mary Baker Eddy was not herself the best exemplar of mind over matter: she had a life-long addiction to morphine, wore glasses, and frequently sought help from doctors. She may have been cynical or just practical. Although Christian Science literature is replete with anecdotes of healing successes, its methods have never been tested with blind studies and controls. Examinations of death records in Christian Science communities unsurprisingly reveal higher mortality among adherents who eschew doctors. For adults, it's a free choice, but what of children subjected to prayer over medicine? Christian Science is not science, and may not even be Christian, but it is definitely dangerous.