July 15: Let God Sort Them Out

The First Crusade Captures Jerusalem (1099)
Then Kills Everyone 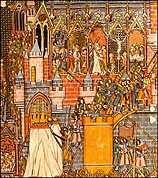 It was on this date, July 15, 1099, that the First Crusade, or "Campaign of the Cross," achieved its objective and captured Jerusalem and the Holy Sepulcher. Once the Muslim citizens of Jerusalem lost control of their city, the Crusaders then proceeded, with the zeal of fundamentalist fanaticism, to massacre thousands of unarmed men, women and children. It is important to remember that, although the rest of the Crusades were characterized by lust for wealth and combat (among the knights and clerics), or a passion for escape from serfdom (among the peasantry), the First Crusade was the only one in which the motivation for most was Christian righteousness.

This Crusade began in 1096 and the siege of Jerusalem began on 7 June 1099. A month of preparation preceded the attack on 14 July. This period included a failed first assault, urged by a seer with faulty vision, and a risible (from a modern perspective) barefooted walk by Crusaders around the city walls "amid the insults and incantations of Mohammedan sorcerers" — as the Catholic Encyclopedia describes it.

On the 15th, Crusaders breached a lightly defended wall, then tore through the city, killing every man, woman and child in sight. Al-Aqsa Mosque was invaded and its occupants butchered. The Dome of the Rock was assaulted and its inhabitants, who had been promised sanctuary, were slaughtered. The city's main synagogue was burned to the ground, killing many Jews who had taken refuge inside. Those who were not massacred were forced to cart dead bodies out of the city.

Not only is the historical record no late, anti-Christian exaggeration, but contemporary chroniclers were boastful of their bloodshed. Raymond d'Aguilers (1043?-1105), who was there, wrote this account:

Now that our men had possession of the walls and towers, wonderful sights were to be seen. Some of our men (and this was merciful) cut off the heads of their enemies; others shot them with arrows, so that they fell from the towers; others tortured them longer by casting them into the flames. Piles of heads, hands and feet were to be seen in the streets of the city. It was necessary to pick one's way over the bodies of men and horses. But these were small matters compared with what happened in the Temple of Solomon, a place where religious services are normally chanted. What happened there? If I tell the truth, you would not believe it. Suffice to say that, in the Temple and Porch of Solomon, men rode in blood up to their knees and bridle reins. Indeed, it was a just and splendid judgment of God that this place should be filled with the blood of the unbelievers, since it had suffered so long from their blasphemies. The city was filled with corpses and blood.*

Many fled to the roof of the temple of Solomon, and were shot with arrows, so that they fell to the ground dead. In this temple almost ten thousand were killed. ... In the morning, some of our men cautiously ascended to the roof of the Temple and attacked the Muslims, both men and women, beheading them with naked swords; the remainder sought death by jumping down into the temple.**

The First Crusade was the only one of the series that can be considered completely "successful," but its virtues are completely mischaracterized. The Catholic Encyclopedia claims the Crusades transported novel ideas and trade with the East into Western Europe. Even if these claims were true – it was, in fact, peaceful contact with the Arabs of Spain, before the Crusades, that accomplished this – they would not redound to the credit of Christianity. It is tantamount to saying that it required barbaric wars against a superior culture to lift Christendom out of its Dark Ages!

Simón Bolívar (1783) It was on this date, July 24, 1783, that South American liberator and president Simón José Antonio de la Santísima Trinidad Bolívar - Simón Bolívar - was born in Caracas, Venezuela. His parents were wealthy, but they died early. Bolívar inherited a fortune that assured him of a quality education, partly in […]