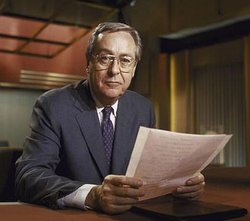 It was on this date, July 14, 1927, that American news reporter, anchor, and NBC commentator John Chancellor was born in Chicago, Illinois. A high school drop-out, Chancellor got his first job as a copy boy at the Chicago Sun-Times. From there his assignments extended from the 1957 desegregation of Central High in Little Rock, Arkansas, and panelist in the Nixon-Kennedy debates, as correspondent for The Huntley-Brinkley Report (1956-1970) and heading the Voice of America (1965-1967), to anchor for NBC Nightly News (1970-1982) and finally editorialist and commentator for the Nightly News (1982-1993).

Chancellor created the idea of using colors to represent the states won by presidential candidates in presidential elections, although he had the red-blue designations reversed from what is used today. In 1992, four years prior to his death, Chancellor was inducted into the Television Hall of Fame. Chancellor was the narrator of the award winning 1994 Ken Burns documentary, Baseball.

Boston Globe columnist Jack Thomas interviewed the newsman about his final struggle with cancer. Do you fear death? asked Thomas. “not as much as I would have thought…” replied Chancellor. What do you think will happen to you after death? asked Thomas. “I’ve been an agnostic for as long as I can remember,” Chancellor replied, “so I don’t know where we go. But if it turns out that the lights are just turned off and nothing happens, well, that’s OK.” John Chancellor died of cancer on 12 July 1996, two days shy of his 69th birthday. The John Chancellor Award for Excellence in Journalism had been established just the year before. It was John Chancellor who said, “Action based only on principles isn't always good even if it feels good.”

"Paradise is one of the crass fictions invented by high-priests and fathers of the Church, a fiction whose purpose is to requite the hellish torments of people on earth with the soap-bubble of a hope of peace in another place."