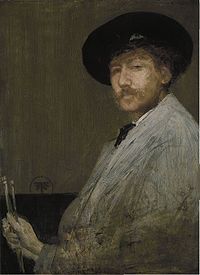 It was on this date, July 11, 1834, that American painter James Abbott McNeill Whistler was born in Lowell, Massachusetts. His father was an Army Major and Whistler himself was educated at West Point, from which he was dismissed. Whistler was a leading proponent of the credo, “art for art’s sake” (the motto, in its Latin iteration, of film studio Metro-Goldwyn-Mayer) and dressed like a dandy, a floppy hat perched atop his head shading a piercing pair of eyes. His famous signature for his paintings was in the shape of a stylized butterfly with a long stinger as a tail. His Arrangement in Grey and Black (1871), better known as Whistler’s Mother, is considered quintessentially American—yet the artist left the United States, never to return, at the age of 21. He bounced between residences in Paris, where he studied art, and London, where achieved his greatest successes.

While in Paris, Whistler became an aggressive Atheist. In London his paintings got a better reception, in spite of harsh criticism from John Ruskin—Ruskin panned Whistler’s Nocturne in Black and Gold: The Falling Rocket (1875) and Whistler sued him and won. Whistler made a name for himself, not simply due to his talent, but also because of his flamboyant personality. The painter-designer and diplomat David Maitland Armstrong says, in his Reminiscences,* that Whistler was notorious for ridiculing the Bible and singing blasphemous songs.

Before he died in London at age 69, on 17 July 1903, Whistler was made a member of the French Légion d’Honneur. Whistler was pragmatic and Rationalist about his art, saying:

Art should be independent of all claptrap—should stand alone, and appeal to the artistic sense of eye or ear, without confounding this with emotions entirely foreign to it, as devotion, pity, love, patriotism, and the like. All these have no kind of concern with it, and that is why I insist on calling my works ‘arrangements’ and ‘harmonies’.”**

It was on this date, October 10, 1959, that American actress, comedian and author Julia Sweeney was born in Spokane, Washington. From her start with the improvisational comedy troupe The Groundlings, Sweeney was discovered in 1989 by “Saturday Night Live” producer Lorne Michaels and became a featured player on the TV show from 1990 to […]