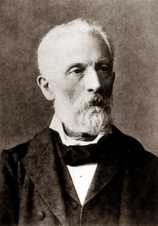 It was on this date, June 26, 1826, that the anthropologist and pioneer ethnologist Adolf Bastian was born in Bremen, Germany. At the University of Heidelberg he studied law, then took up natural sciences and medicine in Berlin, Jena and Würzburg. He took a medical degree in Prague. As a ship's doctor he traveled to Australia, Peru, the West Indies, Mexico, China, the Malay archipelago, India and Africa. The result of his journeys was Der Mensch in der Geschichte (Man in History, 1860), a study in which he proposed a theory of cultural evolution which anticipates, and may have sparked, Carl Jung's idea of the collective unconscious.

Bastian noticed certain Elementargedanken, or "elementary ideas," which appeared in almost all cultures and religions of the world. Bastian concluded that all humans must have the same basic mental processes, and that this conformity of psychology produced similar responses, in different cultures, to similar stimuli, modified only by Volkergedanken or "folk ideas." From this, Bastian inferred that the social group has a kind of group mind, Gesellschaftsseele, or social “soul” (in the secular sense) in which the individual mind is embedded. His theory was why Bastian has been labeled the father of ethnography. Bastian is known to have influenced Swiss psychiatrist and psychotherapist Carl Jung, American comparative mythologist Joseph Campbell and the “Father of American Anthropology,” Franz Boas. He also wrote on Buddhism, and on psychological dilemmas present in native superstitions.

His three-volume Man in History is shot through with passages testifying to Bastian's agnosticism. Speaking of science as foe and God as protector, in volume one he says, "we no longer fear when a mighty foe shakes our protector from his heaven, to sink with him into an abyss of annihilation." Ever the explorer, Adolf Bastian died, while on a return voyage, in Port of Spain, Trinidad, on 2 September 1905, at age 79.

Warren Buffett (1930) It was on this date, August 30, 1930, that Warren Buffett, known as "the Oracle of Omaha," was born in Omaha, Nebraska. As Chairman of Berkshire Hathaway, Buffett became perhaps the greatest investor of all time – reportedly worth almost $43 billion – second in wealth only to Microsoft Chairman Bill Gates. […]