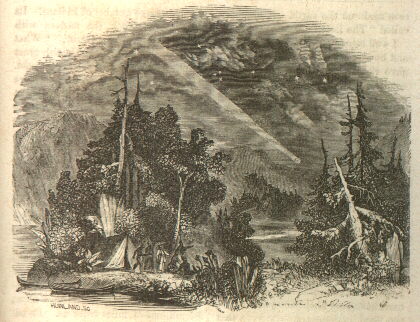 It was on this date, June 2, 1858, that Italian astronomer Giovanni Battista Donati (1826-1873) observed and recorded the first appearance of the comet that bears his name today. The astronomer was 32 at the time and the Donati Comet is one of six he discovered.

Throughout human history, while stars and meteors were usually seen as good signs, the appearance of a comet in the skies has been interpreted as one of the divine "signs and wonders" — a fireball flung by an angry God. The Catholic Church Doctor and Historian Bede (672-735 CE) declared that "comets portend revolutions of kingdoms, pestilence, war, winds, or heat." Albert the Great (1206-1280), the esteemed Catholic scholar of the Middle Ages, taught the same, citing Joel 2:30: "And I will shew wonders in the heavens and in the earth, blood, and fire, and pillars of smoke."

When the Turkish army held Constantinople in 1456, a comet appeared and frightened Pope Callixtus III (1455-1458) into decreeing "several days of prayer for the averting of the wrath of God, that whatever calamity impended might be turned from the Christians and against the Turks." Alas, Allah was stronger: Constantinople is now known as Istanbul, Turkey! The comet is now know as Halley's comet. Even after Sir Edmund Halley had described and explained his comet, the Scottish Church (1680) insisted that comets are "prodigies of great judgment on these lands for our sins..."

If a comet portended pestilence, so the reasoning went, it was God's will and therefore useless to attempt to cure diseases. And, of course, the churches would happily accept money to bribe God on your behalf to stay His holy hand. If a comet portended war, rather than wise statesmanship, princes must instead raise the sword and carry out God's bloody will. The belief that comets presaged wars is memorialized in the Bayeux Tapestry, where a comet can be seen signaling the Norman Conquest of 1066.

That comets were a sign from God was an article of faith in both Catholic and Protestant Europe. Martin Luther (b. 1483) declared, "The heathen write that the comet may arise from natural causes, but God creates not one that does not fortoken a sure calamity." Eventually, scientists, especially the skeptical ones like Edmund Halley, were beginning to show the way out of this mush of myth. In spite of ecclesiastical pressure in the universities in favor of fallacies, God was slowly being squeezed out of the gaps. By the time of Donati's discovery in 1858, the appearance of comets, while still a wonder to behold, was no longer taken as a sign from God. Mankind was superseding superstition.

Donati estimated that his comet has an orbital period of more than 2000 years, so perhaps we humans, if we do not annihilate ourselves in the meantime, will cast off a few more superstitions by the time Donati's Comet returns!