Last Execution for Witchcraft
in Switzerland (1782) 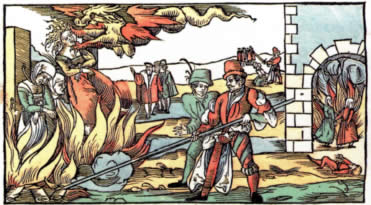 It was on this date, June 17, 1782, that the last legal execution of a witch occurred in Switzerland. From the records we know that Anna Goeldi was hanged in Glarus, Switzerland.

Roman Catholic Switzerland began the witch-hunting craze in 1427 and, along with neighboring Germany, was hell-bent on persecuting this delusion between 1580 and 1660. An especially lethal period coincided with the Thirty Years War between Catholics and Protestants in Europe.

It is a fact that in those days attempts to explain the world in non-scriptural, non-superstitious terms were either ignored or punished. But all of Christian Europe joined in the witch hunting primarily because, in the absence of a scientific explanation of the bad things in the world, such as disease, pestilence, storms and comets, people resorted to belief in magic and superstition. For suppressing science, the churches have complete culpability for the bloodshed.

Confessions of witchcraft were often extracted under torture — and not only was torture supported by the clergy, based on scripture, but the accuracy of confessions acquired under torture was scripturally supported. And why not? If God punishes his creatures with tortures "infinite in cruelty and duration," why shouldn't his ministers on earth imitate him?

In 1437 and 1445, Pope Eugene IV issued bulls exhorting the persecution of witches; in 1484, Pope Innocent VIII issued Summis Desiderantes, inspired by the scriptural command, "Thou shalt not suffer a witch to live" (Exodus 22:18), which prompted the creation of a manual for witch-hunters, Malleus Maleficarum, the Witch-Hammer. To oppose the hunt was heresy.

In 1518, Agrippa of Nettesheim tried to speak reason against the persecution of one accused woman. As A.D. White describes it in his Warfare of Science with Theology, "he was not only forced to give up his office, but for this and other offenses of a similar sort was imprisoned, driven from city to city and from country to country, and after his death his clerical enemies, especially the Dominicans, pursued his memory with calumny."

Professor Cornelius Loos (1546-1595), in a book called True and False Magic, tried to mitigate the brutality of witch-hunting. "The book," says White, "was stopped in the press, the manuscript confiscated, and Loos thrown into a dungeon." Then, in 1593, Loos was hauled out of the dungeon, forced to recant on his knees, and kept under clerical surveillance until his death from the Plague two years later.

Dietrich Flade, chief judge of the Electoral Court in a Rhineland province, began to soften the penalties handed down to accused witches. White says, "He was arrested by the authority of the archbishop and charged with having sold himself to Satan ... brought into the torture chamber over which he had once presided, was racked until he confessed everything which his torturers suggested, and finally, in 1589 was strangled and burnt."

The tide at last turned toward reason, not because God's ministers on earth saw the light, but because the skeptical Age of Enlightenment dawned in Europe. There were holdouts: as late as 1768 in Protestant England, John Wesley maintained that, "The giving up of witchcraft is in effect the giving up of the Bible." And there were a few more sputterings of witch executions: in Italy in 1791, and in Poland in 1793. But in the witch-hunting heartland of Switzerland, the delusion died with Anna Goeldi on this date in 1782.