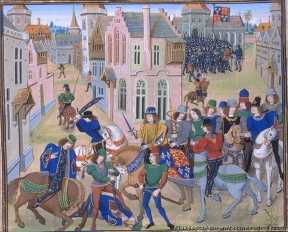 It was on this date, June 12, 1381, that the Peasants' Revolt or Great Rising of 1381, also known as Wat Tyler's Rebellion, began. Geoffrey Chaucer was about 41. The 1300s, or what historian Barbara Tuchman calls "The Calamitous 14th Century,"* was theoretically an Age of Chivalry, but in fact a time of superstition, faith, plague, great cathedrals, great poverty, great ignorance, brutal punishment (visited with a vengeance on the peasantry), sexual license and corruption, especially in the Church.

The Black Death (1348-50) and the religiously motivated Hundred Years' War (1337-1453) disproportionately affected the laboring classes, leaving the manors and the fields understaffed. Many lords bribed their serfs with their freedom and pay if they remained to work the land. But many peasant-serfs were compelled to work for free on church lands. This enriched the churches, but made it difficult for workers to support their families.

To prevent demand from driving up the price of labor, in 1351 the undertaxed ruling classes imposed price controls, known as the Statute of Laborers. Thirty years later, in 1380, 14-year-old King Richard II introduced yet another poll tax – poll from the Latin word for head. Walter Tyler (Wat Tighler), now known as Wat Tyler, who lived in Maidstone, Essex, was outraged when an overzealous tax collector sought to determine if Tyler's daughter was of taxable age (15). He stripped the girl naked and sexually assaulted her. With a hammer, Tyler smashed in the tax collector's skull.

His fellow peasants cheered this action. They banded together to seek redress from the king. Tyler's group was joined by two secular priests named John Ball and Jack Straw. Their party eventually numbered 100,000 strong and they converged on London. Artisans and tradesmen provided food and shelter along the way, and the rebels attacked abbeys and monasteries, those bastions of idle wealth and ecclesiastical corruption. The next thing the mob did was kill all the lawyers and judges they could find, and release their brother peasants from prison.

There were outbreaks of violence among the peasantry throughout England. In London, Tyler, Ball and Straw targeted the two people most responsible for the poll tax: Archbishop Sudbury, the chancellor; and Sir Robert Hailes, the treasurer. These two they found hiding in the Tower of London and that is where they were beheaded. But the rebels, still in the grip of the myth of the "divine right" of kings, believed young King Richard II a natural ally of the poor.

The chronicler Jean Froissart, a partisan of the privileged classes and a loyal Roman Catholic, was 44 when these pre-Reformation events occurred. He records that on June 14 Richard met with Wat Tyler and ordered the Lord Mayor of London to "set hands on him." Tyler was murdered on the spot. Richard seized the moment and declared, "Wat Tyler was a traitor. I'll be your leader." The teenaged monarch immediately agreed to all the rebel demands – chiefly, the abolition of serfdom – and they went home. Thereupon the king reneged on his promises and hunted down and hanged 1500 of the rebels after "jury trials" – trials in which the judge told the jurors that he would hang them if they didn't convict.

Of the leaders of the Peasants' Revolt, Froissart writes,

John Ball and Jack Straw were found in an old house hidden, thinking to have stolen away, but they could not, for they were accused by their own men. Of the taking of them the king and his lords were glad, and then strake off their heads and Wat Tyler's also, and they were set on London bridge...**

So the oppression of the peasants persisted. The churches and priests continued to ignore them in preference to their royal patrons. And Richard, king of England by divine right, declared to the peasants seeking an end to their slavery, "Villeins ye are, and villeins ye shall remain."