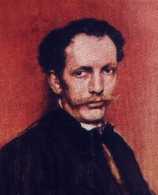 It was on this date, June 11, 1864, that German composer Richard Strauss was born in Munich, Bavaria, the son of an orchestral horn player. Strauss pretty much exemplified the prodigy: he played the piano at age four and began composing at age seven. But at the Royal Grammar School he absorbed a classical education, and at Munich University, Strauss studied philosophy, aesthetics and art history.

His musical successes in tone poem and opera were many, even without being related to the Viennese Waltz family. He not only was a fan of Richard Wagner's music, but a personal friend of Cosima, Wagner's widow. His own tribute to Wagner, Guntram, showed his independence of mind, as it shocked the inner circle of Wagner devotees. The Encyclopedia Britannica calls Strauss's famous Till Eulenspiegels Merry Pranks (Till Eulenspiegels lustige Streiche) (1894) "one of the most brilliant dramatic scores ever penned." What the encyclopedia doesn't mention is the Rationalist philosophy evident in the piece. Till Eulenspiegel is the impudent trickster of Middle Low German folklore who, through his merry pranks, exposes the vices, greed and folly of his contemporaries—from craftsmen through nobles, priests and even the Pope—but always through a humanistic sensibility, not as a religious moralist.

Strauss followed Till Eulenspiegels Merry Pranks with what has become known as the theme music for the 1968 Stanley Kubrick film, 2001: A Space Odyssey. Thus Spake Zarathustra (Also sprach Zarathustra) (1896) was based on the work of the notoriously skeptical Friedrich Nietzsche. Neitsche’s work fictionalizes the travels and speeches of Zarathustra, the Persian founder of Zoroastrianism, and contains the famous dictum “God is dead,” as well as positing that humanity is a transitional form between apes and the Übermensch or “superman”—a godlike creature who rises above uncultivated animality. It is not surprising that its premiere caused great consternation in the German churches.

Strauss's affiliation with the Nazi party in the 1930s and 1940s caused Strauss some problems after the war, but his position was primarily ceremonial and his criticisms of the Nazis had to be tempered because his grandchildren were part Jewish. Richard Strauss died on 13 May 1950. Although his religious skepticism cannot be heard in his music, his music can still be heard today.