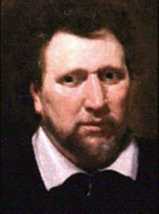 It was on this date, June 11, 1572, that English playwright Ben Jonson was born in London, the son of a clergyman who did not live to see the birth. At Westminster School, Jonson was instructed by the classical scholar William Camden (1551-1623), who lit the fire of his desire for the classics. Though bright, Jonson was poor, so he left Westminster to pursue, by turns, his stepfather's trade of bricklaying, soldiering for England in the Netherlands, and acting – appearing in at least one performance with William Shakespeare.

Jonson must have made a name for himself by 1597 because he was imprisoned in the Marshalsea for co-writing a satirical play that was declared seditious and is now lost: The Isle of Dogs. That same year, after killing a fellow actor in a duel, Jonson claimed benefit of clergy – which at the time meant "literate," and allowed the secular courts to mitigate a potentially severe sentence. Jonson was let off with only the confiscation of his property. During this time he converted to Catholicism, but by 1610 he had reconverted to Anglicanism.

His playwriting continued to be politically volatile: "What excellent fools religion makes of men,"* he wrote in his 1603 tragedy, Sejanus, His Fall. The play was a public failure, but caused him to be interrogated by the privy council for "popery and treason." The next year he collaborated with George Chapman (1559?-1634) and John Marston (c. 1575-1634) on Eastward Ho! - and voluntarily followed his fellows into prison when they were arrested.

From 1605, Jonson wrote the comedies for which he is famous. In Volpone (1605), he tweaked the clergy by writing, "Hood an ass with reverend purple, so you can hide his two ambitious ears, and he shall pass for a cathedral doctor."** He wrote many "masques," or court entertainments, and Jonson's followers – Robert Herrick, Thomas Carew, Sir John Suckling, and Richard Lovelace – formed a circle of poets knows as the Cavaliers.

Jonson died on 6 August 1637 and was buried in Westminster Abbey, a superior wit with no strong attachment to any particular religion.

The supposed ‘left’ comedian is left behind I keep watching Bill Maher’s “Real Time” show on HBO, and have done so, Religulous-ly, almost since its inception in 2003. Although Maher was always irreverent toward religion, this was made crystal clear in his 2008 documentary, Religulous. I liked that about him, especially when he criticized the […]