May 26: Alse Young Executed for Witchcraft 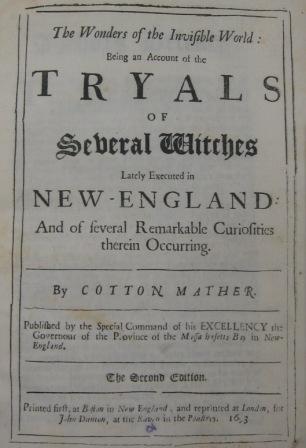 It was on this date, May 26, 1647, that the first witch was hanged in America for the crime of witchcraft. Alse Young was arrested, tried for this capital offense in Windsor, Connecticut, and hanged at Meeting House Square in Hartford, on what is now the site of the Old State House.*

There is no further record of Young's trial or the specifics of the charge, only that Alse Young was a woman, as 80% of those executed for witchcraft were, and that her execution anticipated the 1692 Salem witch trials by some 45 years. And she was followed by many women, some of whose names we know: Mary Johnson in 1648; Rebecca (and Nathaniel) Greensmith and Mary Barnes in 1663, during an outbreak of the witchcraft delusion in Hartford. During the Salem witch trials, 30 years later on, 200 were accused and 19 executed: 15 of them women.

Cotton Mather (1663-1728), a contemporary priest and politician, in his Wonders of the Invisible World (1693), wrote in reference to Salem witchcraft and stressed how urgent the fight against witches and deviltry really was:

The New Englanders are a People of God settled in those, which were once the Devil's Territories; ... The Devil thus irritated, immediately try'd all sorts of methods to overturn this poor plantation: .... I believe, that never were more satanical devices used for the unsettling of any people under the sun, than what have been employ'd for the extirpation of the vine which God has here planted, ... But, all those attempts of hell, have hitherto been abortive, .... Wherefore the Devil is now making one attempt more upon us; .... We have been advised by some credible Christians yet alive, that a malefactor, accused of witchcraft as well as murder, and executed in this place more than forty years ago, did then give notice of, an horrible plot against the country by witchcraft, ... which if it were not seasonably discovered, would probably blow up, and pull down all the churches in the country. And we have now with horror seen the discovery of such witchcraft!

The Bible was very direct about how to treat witches: Exodus (22:18) said, "Thou shalt not suffer a witch to live." And Leviticus (20:27) said, "A man also or woman that hath a familiar spirit, or that is a wizard, shall surely be put to death: they shall stone them with stones: their blood (shall be) upon them."

There is no doubt that theologians reasoned, "If the All-wise God punishes his creatures with tortures infinite in cruelty and duration, why should not his ministers, as far as they can, imitate him?" (A.D. White, Warfare of Science with Theology) Consequently, torture was a favorite method, not for finding the truth of witchcraft, because witchcraft never contained any, but for quite effectively extracting confessions — because people will say anything to get the pain to stop. Witchcraft jurisprudence itself anticipated the anti-communist purges of the 1950s in the US: To confess to witchcraft was to earn a life sentence in jail; to deny the charge often resulted in a death sentence.

The crime of witchcraft disappeared from the list of capital crimes in Connecticut after 1715, and was not thereafter prosecuted. (It should be noted that there were no actual witch burnings in the United States, but there were executions.) The relatives of those executed in the Salem witch-trials received compensation about then. But the stain of execution for the imaginary crime of witchcraft remains.

*A journal of then-Massachusetts Governor John Winthrop states that "One of Windsor was hanged." The second town clerk of Windsor, Matthew Grant, confirms the execution with his 26 May 1647 diary entry, "Alse Young was hanged."

"It vexes me when they [clerics] would constrain science by the authority of the Scriptures," wrote Galileo, "and yet do not consider themselves bound to answer reason and experiment."