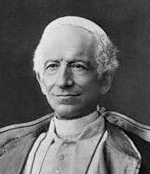 It was on this date, May 16, 1891, that Pope Leo XIII issued the encyclical Rerum novarum, on the "Condition of Labor," about the relations of employer and employee. That the churches provided any service whatsoever to working people until the last century, aside from relieving them under false pretenses of much of their hard-earned money, is about as phony a claim as that of faith-healers.

Even the “Laws of justice which Hammurabi, the wise king, established” about 1780 BCE include principles of fairness to workers, including a minimum wage. Conditions in the Roman world before the barbarian invasions of the fifth century were better for non-slave workers than at any time until our own: free bread, free schools, free entertainment, free health care, cheap public baths, trade unions and more holidays than we can imagine. Slavery had been greatly reduced. Then the Empire fell and Christianity rose: 80%-90% of European workers became serfs, which is slavery by another name, and all of the favorable conditions known in the Empire were lost. From 500 to about 1500, when the churches had the most social influence, they helped workers the least.

Conditions inspiring Peasants Wars in the 14th and 15th centuries were met by the same silence that stole Martin Luther's tongue in the 16th. But the heretics spoke up — Arnold of Brescia, John Wyclif, and some of the Hussites and Anabaptists — and were brutally beaten by the church. Prices rose but wages did not, and unions were forbidden by such means as the Anti-Combination laws in England. Economic conditions in France were zero-sum: as Louis XIV ostentation waxed, the peasants of the countryside waned. The churches stood mute because the money kept rolling into the collection box.

Rights for workers were won in the 19th century through the efforts of atheistic Socialists and union movements. The only prominent cleric to support the workers was Charles Kingsley (1819-1875) and his Christian Socialists, who insisted that only social justice could save Christianity from irrelevance. Workers in Catholic countries — Italy, Spain, Portugal and the Papal States — had the worst treatment. The cry of the workers at last pierced Leo's ear, but he waited until he had held Peter's chair for 13 years before saying a word on social justice.

"Let it be taken for granted," wrote Leo XIII, "that remuneration should be sufficient to maintain the wage-earner in reasonable and frugal comfort." But when asked to define just what such a "living wage" should be, Leo fell mute again. Worse, in 1931 Pius XI issued the encyclical Quadragesimo anno, which (¶¶ 91-94, 133) repudiated Rerum novarum by endorsing the Fascist-Corporate State. The Nazis eagerly complied, as did many other mostly Catholic countries. Now without God's help, workers had to fight for and win the things we take for granted today: the eight-hour day, the five-day work week, overtime pay, workers compensation, retirement, health care and, most especially, the right to organize.

It is at least dishonest to call Rerum novarum, as the Catholic Encyclopedia does, "the most fruitful and effective principle of industrial justice that has ever been enunciated." As with every other social reform, it was only after the freethinkers had built the train and started it on the track that the churches felt it safe to climb aboard.

Oscar Wilde (1854) It was on this date, October 16, 1854, that Irish writer Oscar O'Flahertie Fingal Wills Wilde was born in Dublin. Oscar Wilde probably inherited from his feminist mother, by example if not by genetics, a flair for the dramatic in style and behavior. Wilde graduated from Oxford and moved to London to […]