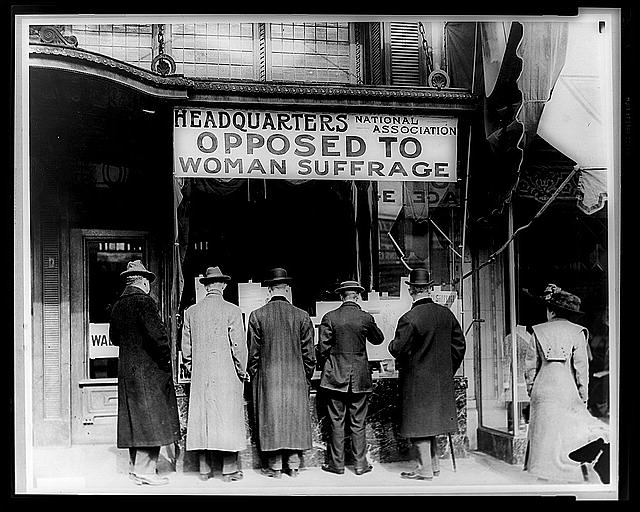 It was on this date, May 15, 1869, that the National Woman Suffrage Association (NWSA) was created by Susan B. Anthony and Elizabeth Cady Stanton. The NWSA, based in New York, was one of two women's rights groups that split over strategy. Considered the more radical of the two, the NWSA focused on voting rights for women, but also urged reform of laws concerning marriage and divorce. Twenty-one years later, in 1890, the two merged to become the National American Woman Suffrage Association (NAWSA) and, 30 years after that, got the 19th Amendment passed, giving women in the US the right to vote.

New Zealand was the first Western nation to affirm a woman's right to vote in 1893. Australia followed in 1902. In fact, Swedish women with property could vote in city elections as early as 1862, with full suffrage rights in 1921. Britain followed in 1928 under the leadership of suffragist Emmeline Pankhurst. During the early 1900s, Canada, Finland and Germany granted the vote to women. In the mid-1900s, China, France, India, Italy and Japan followed. There are still some countries, mostly under Islamic law, that don't allow either sex to vote, but the trend is clear for all other rights for women: they begin with a vote.

Where were the churches in this debate? In every ancient civilization that achieved an advanced cultural level, equal rights for women were a feature — at least in comparison with Christian Europe. That the ancient Hebrew nomads were severely paternalistic demonstrates that they lagged behind their contemporaries in this respect. Epicurus, a skeptic, promoted equality of the sexes. By the end of the pre-Christian era, women of Ancient Rome were generally free from male tyranny and enjoyed social equality.

The triumph of Christianity brought with it not only the decline of the social order under the Empire, but a reduction of four-fifths of European women to the status of serfs. Since a similar number of men held the same status, you might say men and woman were equal. This was the Dark Age. From 500 to 1500, the Church worked its magic and (based on the `Genesis' myth) condemned woman as the downfall of man. Unless you get your history lessons from religious schools or Disney films, the fact is that noble and knightly women were nothing like the shrinking maidens and tender matrons of romantic fiction: they were aggressively promiscuous, cruel and unscrupulous with their inferiors, and just as noisily self-assertive as the men.

Women of nobility and wealth were rare, of course. The churches could more easily control the poor. Before the late 19th and early 20th centuries, a peasant woman in both Catholic and Protestant countries, was not a person. A husband could beat his wife, or sell her, take all her property and her children. Few occupations outside of wife and mother (and prostitute) were open to her. Down to the 19th century, women were denied the vote because the law specified only men. "No woman was ever known to escape a criminal statute because its language ignored her sex," wrote lawyer Marilla Marks Ricker in the late 1800s. "Shall the word 'he' include woman in one set of laws and exclude her in another?"

When the churches realized that most of the reform was coming from atheists, agnostics and Quakers, and that women's rights was becoming a ‘fait accompli,' they soon discovered God allowed equality. Although they didn't live to see it succeed, the movement that won the vote for women in the US in 1920 was founded by two agnostics, Susan B. Anthony (d. 1906) and Elizabeth Cady Stanton (d. 1902), who formed the National Woman Suffrage Association on this date in 1869.

François Mitterand (1916) It was on this date, October 26, 1916, that French President François Mitterand was born in Jarnac, Charente. Born into a conservative, a Roman Catholic family, Mitterrand first entered politics by way of the ultranationalist Croix de Feu organization, choosing it over the Vatican-opposed Action Française. Mitterand served as a junior minister […]