May 10: Religion and Censorship 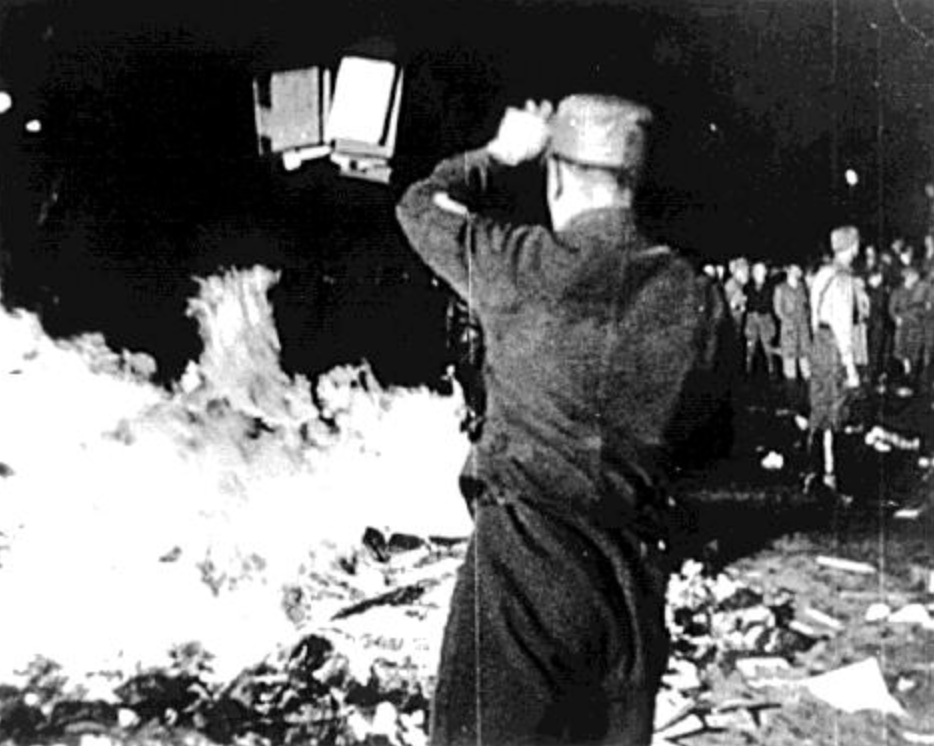 It was on this date, May 10, 1933, in Berlin that about 20,000 books were burned during a student rally as the Nazis rose to power in Germany. The suppression of free speech and ideas was a tactic of Joseph Goebbels' Ministry of Propaganda. The target this time was anti-Nazi, Jewish-authored, and so-called "degenerate" books, but suppression of ideas by the burning of books, often culminating in the burning of people (as Heinrich Heine famously observed), is an old idea. The Nazis were neither the first nor the most comprehensive book-burners in history. The rationale never changes, but the irony of censorship by book-burning remains the same: you have to inflict the harm (read the book) before you can judge that harm can be inflicted.

Before he died in 210 BCE, Chinese Emperor Qin Shi Huang (秦始皇) — who created and then buried the famous Terra Cotta Warriors in Xi'an, China — ordered the burning of most extant books (for reasons of national security, of course); just to be sure, he had the leading scholars executed, too. In Christendom, Pope Innocent II in 1140 had the writings of 11th century French philosopher and theologian, Peter Abélard burned for heresy. In 1205 Saint Dominic, founder of the Dominican Order, while traveling among the Albigensian heretics, supervised the burning of heretical books. In 1240, the Bishops of France persuaded King Louis IX to burn the collection of Jewish civil and ceremonial law known as the Talmud — the Dominicans, or "hounds of the Lord," were only too happy to comply. Pope Gregory IX issued a bull in 1239, encouraging the burning of the Talmud everywhere.

John Calvin was probably the most efficient: in 1600, when he burned Michael Servetus at the stake for heresy, and "around his waist were tied a large bundle of manuscript and a thick octavo printed book" (according to Osler). When the British burned the US Capitol in 1814, the entire Library of Congress collection was lost; it was rebuilt a year later from the personal library of Freethinker Thomas Jefferson. The largest single act of book burning in modern history took place on 25 August 1992, when the Oriental Institute (Orijentalni institut) in Sarajevo was attacked by Serb nationalist forces, who immolated the National and University Library of Bosnia, destroying a priceless collection of 5,263 bound manuscripts and hundreds of thousands of Ottoman documents.

Some book burnings, like the burning of the Talmud, were not so solely aimed at stamping out ideas but for a more nefarious purpose: suppressing a culture. A notorious illustration of this was in July of 1562, when Bishop Diego de Landa burned five thousand idols and 27 hieroglyphic rolls at Mani in the Yucatán. He is the main reason that so few samples of Mayan hieroglyphs survive, yet the bishop blithely observed, "We found a large number of these books in these characters and, as they contained nothing in which there was not to be seen superstition and lies of the devil, we burned them all, which they regretted to an amazing degree and which caused them great affliction."

Other religions took a leaf from the Christian playbook: In early March 2001, about 200 right-wing Hindus burned copies of Muslim Korans and tore up posters of Islamic shrines in New Delhi. Muslims protested in retaliation. In January 2001, after pressure from Islamic fundamentalists, the Egyptian Ministry of Culture burned 6,000 books of homoerotic poetry by Abu Nuwas. In May 1981 Sinhalese police officers burned the public library of Jaffna, northern Sri Lanka, destroying 97,000 books in the second largest library in Asia.

The most famous recent book burning involved the 1988 novel The Satanic Verses, by Salman Rushdie, based on Muhammad’s life: in December 1988 and January 1989 British Muslims burned the novel in Bolton and Bradford. Not satisfied with that, the Islamic Defence Council demanded that Penguin Books apologize, withdraw the book, destroy any extant copies, and promise never to reprint it; just to be sure, some translators were murdered. On 14 February 2006, Iran’s official state news agency reported, on the anniversary of the 1989 Khomeini fatwa, that the government-run Martyrs Foundation had announced, "The fatwa by Imam Khomeini in regards to the apostate Salman Rushdie will be in effect forever." A bounty of $2.8 million remains on his head.

But Christianity has a longer history of defending an all-powerful deity by shielding the mind from strange ideas: The Roman Catholic Index librorum prohibitorum, or Index of Prohibited Books — established at the Council of Trent in 1557 and allowed to lapse only in 1966 — was in fact supplanted by Canon Law: Catholics are still not allowed to read books likely to disturb their comfortable faith.

Recalling not only the book-burnings of 20 years earlier, but criticizing the anti-intellectual McCarthyism of his own day, Ray Bradbury's 1953 science fiction novel Fahrenheit 451 (named for the temperature at which book paper burns), envisioned a dystopia in which government agents, called "firemen," are assigned to burn books likely to disturb their citizens' peace of mind. It's the same old story as when the Nazis burned books on this date in 1933: "We know better than you do what's good for you to read."

Stephen said he never lost his faith because he never had any and helped to bring Thomas Henry Huxley's newly coined word, "agnostic," into vogue.