It was on this date, May 1, 305, that Roman Emperor Diocletian abdicated his office. He had ruled an Empire too large for one man to administer, so he chose a soldier, Maximian, and two generals, to form a Tetrarchy and govern as a team — an arrangement that did not survive his death in 313. He was Emperor for 21 years, and it was in the last four years of that period that he oversaw the persecution of Christians which today bears his name. This, in spite of his allowing his wife and daughter to join the troublesome cult. 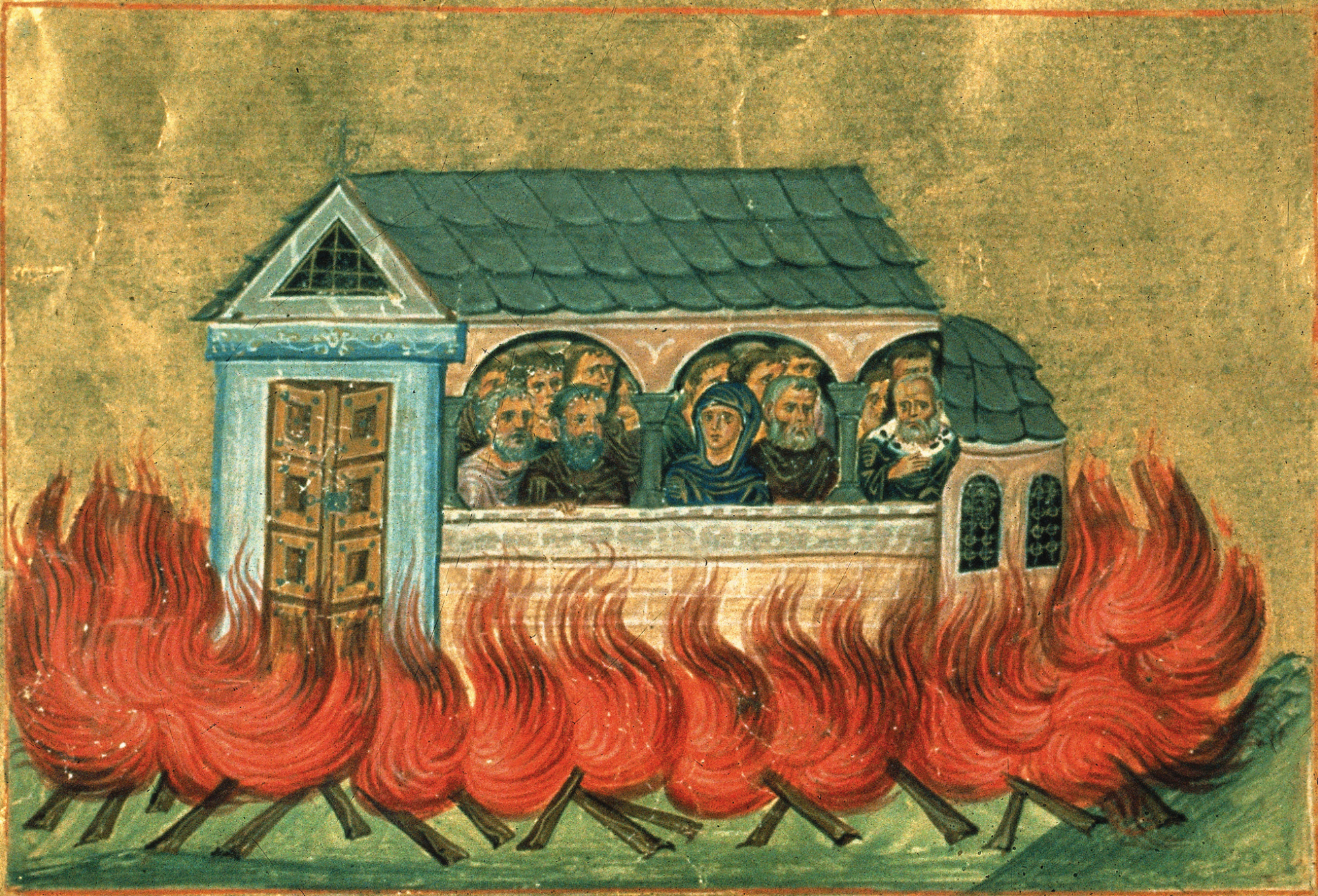 Martyrs of Nicomedia (under Diocletian)

The chief trouble with the Christians was that they refused to make the ritual sacrifice to the Emperor, a loyalty oath that required no more than a few grains of incense and a few mumbled words — on a par with the perfunctory recitation of the Pledge of Allegiance and "under God" practiced in the US — although we must bear in mind that the US is a secular republic and Rome was not. This duty, however, proved too much for the Christians, and Diocletian ordered severe penalties against their disloyal insubordination.

That there were Christian martyrs during the two general persecutions in the Roman Empire there is no doubt, but considerable mythology. The one under Emperor Decius in 250-251 resulted in perhaps 50 executions; the one under Diocletian in 302-305 resulted in perhaps 50 more executions (there was a brief persecution, as well, under the mentally unbalanced Nero). Even the Catholic Encyclopedia, which normally endorses many of the martyr fairy tales, cannot come up with a number. In fact, only a few hundred real martyrs in 250 years can be historically verified.

The persecution of Christians stands in sharp contrast to the persecutions by Christians, once they bullied the Empire into legalizing their cult. The first difference was the mindset. In Rome, the code of conduct was external: that is, no one cared what you believed, so long as you behaved properly. But with the Ages of Faith, which included the Dark Ages, the mindset reversed to internal: in simple terms, no one cared how you behaved, so long as you believed properly.

With Bible in one hand, and the testicles of the secular power in the other, the Church killed many times even their inflated number of martyrs of Manichaeans, Arians, Waldensians, Albigensians, Cathars, Witches, Beguines, Bogomils, Beghards, Lollards, Moors, Hussites, Huguenots, Protestants by Catholics, Catholics by Protestants, and, of course, Jews.*

It is only good fortune that those with Bibles and weapons, or with Korans and weapons, for that matter, were so anti-science: imagine what a human holocaust they could have perpetrated to redeem rebellious souls if they had had weapons of mass destruction! (Just imagine!) It is a fact of history that those who take their religion less seriously will persecute less and live better — perhaps even live longer! That may have been why Emperor Diocletian retired from the purple on this date in 305.

I also leave my religion to Dr. Cutts Barton… hereby empowering the Sub-Sacrist to strike him on the head when he goes to sleep in church… I leave the Reverend Mr. Catcott some little of my free thinking, that he may put on spectacles of reason and see how vilely he is duped in believing the scriptures literally.