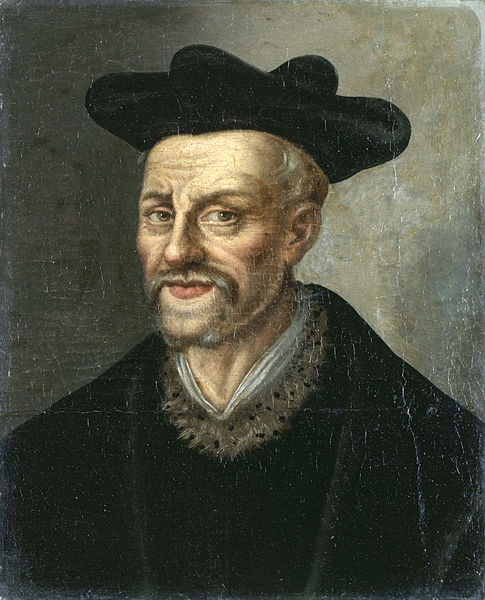 We don't know the precise date of his birth at Chinon in Touraine, in 1495, but it was on this date, April 9, 1553, that the French satirist François Rabelais died in Paris. He was ordained and became a Franciscan monk, left the order in disgust to become a Benedictine, left them, too, in disgust and became a wandering priest — then discovered medicine, became a physician, and worked a few years at a hospital in Lyons.

Using a pen name, in 1553 he published his first book, Pantagruel, the beginning of what would become a popular series of at least four books describing the adventures of Pantagrueland Gargantua published through 1542. He may also have written a fifth. The books comprised a folk epic that allowed Rabelais to satirize clerical education, medieval philosophy and monastic orders, praising the Epicurean delights of Chinon wines and bawdy behavior: food, drink, sex, and detailed descriptions of bodily functions. "Drink always and you shall never die," he wrote in Gargantua. But Rabelais also expressed his love for secular learning and a confidence in human nature.

The tone of the books proved too much for the clerical powers of the 16th century, however: the Sorbonne condemned Pantagruel, and the whole lot was placed on the Catholic Index of Prohibited Books. It is notable that the grossness of behavior depicted in his series, which reflected a general looseness of morals of the time, was not what the ecclesiastics condemned: they objected to Rabelais' description of the clergy, about whom he only told the truth!

While explicit in some things, he was not explicitly anti-Christian, yet he was clearly not faithful. For some reason, the Bible didn't make his top-four book list: "I find great delight in reading the Morals of Plutarch, Plato's magnificent Dialogues, the Monuments of Pausanias, and the Antiquities of Athenaeus," he wrote, "while I wait for the hour when it will please God, my Creator, to call me and bid me leave this earth." Even the Catholic Encyclopedia can claim only that "his religion is scarcely more than that of a spiritually-minded pagan."

Whatever his true opinion, he was in constant defiance of his religious vows. It is not surprising then that on his death, he is reported to have quipped, "Draw the curtain, the farce is played out." Or maybe he said, "I go to seek the great Perhaps."

Here’s your Week in Freethought History: This is more than just a calendar of events or mini-biographies – it’s a reminder that, no matter how isolated and alone we may feel at times, we as freethinkers are neither unique nor alone in the world. Last Sunday, August 19, but in 1921, the creator of the […]