Joseph Smith and the Mormon Church (1830) 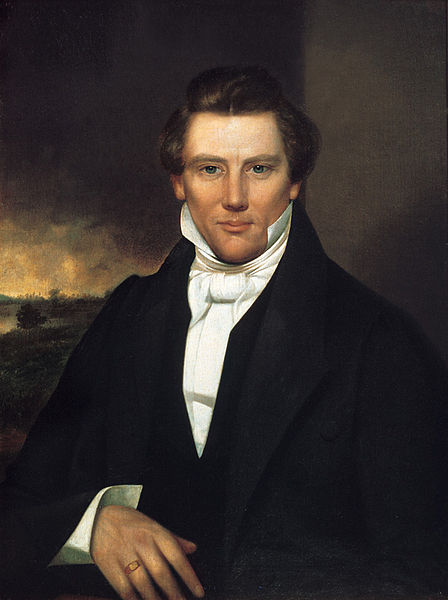 It was on this date, April 6, 1830, that 24-year-old Joseph Smith organized the first Church of Jesus Christ of Latter-Day Saints, also known as the Mormon Church, at Fayette, Seneca County, New York.

Coming from two previous generations of superstitious and neurotic seers of visions — who believed in miraculous cures, heavenly voices and direct revelation — Joseph Smith was born in Vermont in 1805. His father worked as a dowser, finding sites for wells with a divining rod. Son Joseph, as he grew up, acquired the reputation as a con-man and a finder of buried treasures.

Joseph Smith's First Vision of the angel Moroni, came on the 22 September 1827, but he didn't publish anything about it until 15 years later. His account says that he was directed where to unearth a new "Gold Bible," engraved on metal plates in an Egyptian dialect only he would be able to read, with the aid of magical goggles. Apparently, divine powers only extended so far, because Smith, who never really acquired a knack for reading and writing in English, dictated his translation of the "reformed Egyptian" to a succession of secretaries from behind a curtain. Thus was born the Book of Mormon.

Linguists conjectured that Mormon might be related to the Greek word for "hobgoblin," but Smith said he made it up from more plus the (nonexistent) Egyptian word mon meaning "good." Soon after their translation, the plates were somehow spirited away by the same angel, leaving only drawings and witnesses to testify to their former existence. Egyptologists called the writing closer to gibberish than to Egyptian.

The Mormon story itself, of a lost Hebrew tribe coming to America and comprising the ancestors of the Indian tribes of his day, does not agree with anything in pre-Columbian American history. That the people depicted in the "Book of Mormon" were devout Jews is also doubtful, as they seemed to have no knowledge of Mosaic law. Indeed, the book seems to have been cribbed from an earlier book, published near Smith's home, called View of the Hebrews, by Ethan Smith (no relation).

Mostly in flight from prosecution, the Mormon Church moved from New York, to Ohio, to Missouri, to Illinois (where Smith set up a virtual theocracy in Nauvoo), and finally (under a more able leader, and another son of Vermont, Brigham Young) to Salt Lake City, Nevada. The Church had many confrontations with U.S. law over its actions, but also with its doctrines, particularly over polygamy, which was equivocally barred by the Book of Mormon, but established by Smith's own revelation on 12 July 1843. In a miraculous occurrence, the revelation was rescinded on 6 October 1890, although some church members still practice polygamy. Church discrimination against black people ended only in 1978. Retroactive missionary work — the practice of posthumously baptizing non-Mormons (especially Jews) — is still controversial.

Joseph Smith didn't live to see Salt Lake City. For attempting to silence a critical newspaper by having his followers destroy it, Smith was arrested with several other church members and charged with inciting a riot. The charge was increased to treason against Illinois once he was safely in custody. On 27 June 1844, he attempted to escape through his jailhouse window, but was shot multiple times by an armed mob, and fell, exclaiming, “Oh Lord my God!” Smith died shortly after hitting the ground, but was shot several times more before the mob dispersed. He was only 38. But unlike most religious founders, Joseph Smith left traceable blood descendants.

In “Of Human Bondage,” the author's surrogate, Philip Carey, "looked upon Christianity as a degrading bondage that must be cast away at any cost..." In "Summing Up," Maugham said, "I remain an agnostic."