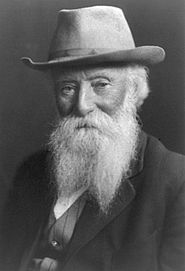 It was on this date, April 3, 1837, the American naturalist John Burroughs was born. He grew up in the Catskills in New York State and developed friendships with Ralph Waldo Emerson, Thomas Edison, John Muir, Walt Whitman, President Theodore Roosevelt and Henry Ford. "If I were to name the three most precious resources of life," wrote Burroughs, "I should say books, friends and nature; and the greatest of them, at least the most constant and always at hand, is nature."

In his writings he expressed a conception of the universe that one biographer described as "scientific pantheism." In The Light of Day (1900), Burroughs reflected, "When I look up at the starry heavens at night and reflect upon what it is that I really see up there, I am constrained to say, `There is no God.' ... It is not the works of some God that I see there ... I see no lineaments of personality, no human traits, but an energy upon whose currents, solar systems are bubbles."

On the strength of his scientific works, the heavily bearded Burroughs won a place in the American Academy of Arts and Letters. In his 1912 book, Time and Change, Burroughs wrote of "the God we have made ourselves out of our dreams and fears and aspirations." Ever the scientist, he said, "Our civilization is not founded upon Christianity; it is founded upon reason and science." And elsewhere, "Science makes no claim to infallibility; it leaves that claim to be made by theology."

Rejecting a key Christian doctrine, Burroughs wrote, "Of the hereafter I have no conception. This life is enough for me." After World War I his style of writing became passé, only to be rediscovered by the environmental movement for its value in preserving nature. Burroughs attained the age of 84, and died while passing through Ohio, aboard a train on a return trip from California to his beloved Catskills home, "Woodchuck Lodge," on 29 March 1921.

The Week in Freethought History (November 11-17)

Here’s your Week in Freethought History: This is more than just a calendar of events or mini-biographies – it’s a reminder that, no matter how isolated and alone we may feel at times, we as freethinkers are neither unique nor alone in the world. Last Sunday, November 11, but in 1922, science fiction and satire […]